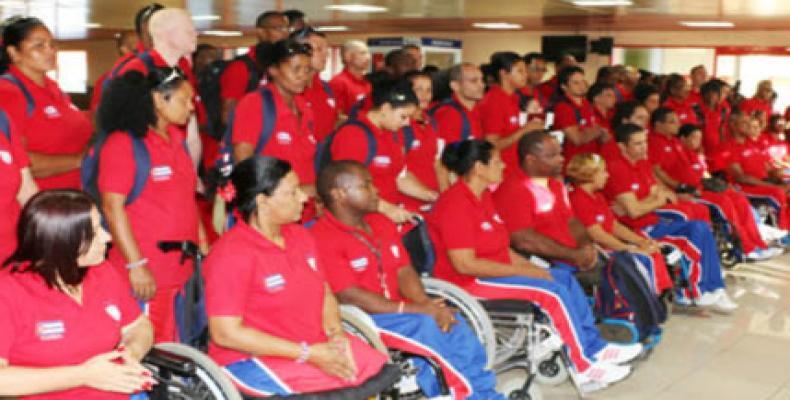 The Cuban sports delegation that will participate in the V Para-Pan American Games Toronto 2015 and comprising 96 people, left today from Terminal 3 of José Martí International Airport in Havana.

The 56 Cuban athletes competing from August 7 to the 15 were seen off by local sport legends and the highest authorities of the National Institute of Sports, Physical Education and Recreation (INDER), who confirmed the confidence in athletes to defend Cuba and its heroic people with dignity.

Cubans will compete in 8 disciplines opting for 71 medals of the 393 sets of medals in dispute, to keep the 4th place of Guadalajara 2011 with a high degree of efficiency and professionalism, coupled with the premise of competing with honor in each event.

Nicaragua again silenced Cuban bats during the 6 innings of the game to win the bronze medal of the 3rd World Baseball Championship, U-12, in a final day that saw US crown for the 2nd consecutive time by defeating 7-2 Chinese Taipei, event where Cuba finished 4th.

Although the Cuban pitching was the best in the tournament, especially Oscar Piñera (1.24 PCL and 1-1 in wins and losses), Yanquiel Fernández (1.38 and 1-0), Félix Arronde (1.44 and 1-0), Ernesto Cabrera, Cubans had the lowest rate among the 6 finalists excepting Cesar Hernandez, Alejandro Zamora (400), Rayko Ramirez (389) and Arturo Mendoza (370) who batted effectively.

The Brazilian Sports Minister, George Hilton, said that Beijing won the home of the Winter Olympics 2022 as a result of the special attention of the Chinese government to the development of sports for many years.

During the vote of the International Olympic Committee (IOC) held in Kuala Lumpur, Malaysia, Beijing defeated the Kazakh city of Almaty, to become the first city to host both the Summer Olympics and Winter Olympics.

"We congratulate China on the new success where they'll surely win many medals. The victory of Beijng is the fully consecration of its government to the development of sports," Mr. Hilton said in a statement to Xinhua news agency.

The former South African Tokyo Sexwale considered running for president of FIFA, following the corruption scandal that exploded in that body of world football for several weeks.

According to local media, Sexwale, 62, who in 2009-2013 was Minister of Human Settlements, is today linked to the business sector.

In late May the headlines of the international press announced the arrest of 7 officers of the Federation during a raid by US and Swiss authorities.

The charges have been repeated in the documents and statements are relevant conspiracy, large-scale fraud and money laundering.