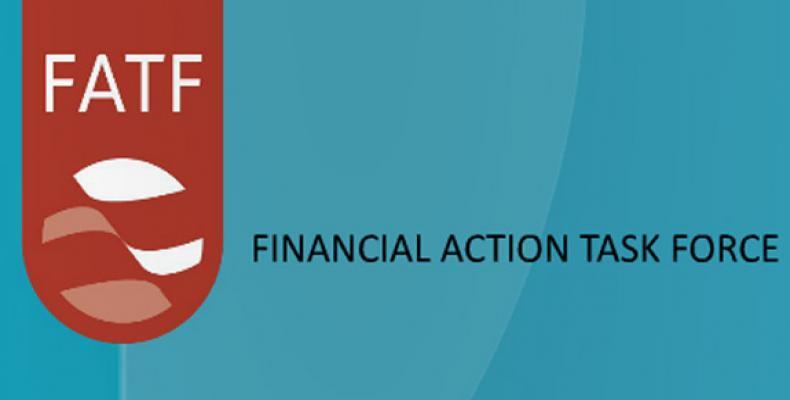 The Financial Action Task Force (FATF) has decided to remove Cuba from its so-called Grey List, an action expressing international trust in the Cuban banking system and acknowledgement to the island's work against money laundering and terrorism financing.

The FATF is an intergovernmental entity set up in 1989 by the G-7 to promote policies to fight money laundering and the financing of terrorism.

During a recent plenary meeting in its headquarters in Paris, the FATF International Cooperation and Evaluation Group expressed satisfaction for the significant advancement of Cuba.

"Cuba has made significant progress to improve its Anti-Money Laundering and Combating Terrorism Financing regime (AML/CFT)," reads the document issued by the group and adds that Cuba has substantially addressed its action plan, by becoming a member of GAFISUD, the FATF chapter for the Latin-American region.

During the recent meeting in Paris, representatives of several nations stressed the Cuban government´s commitment to implement the action plan of the Financial Action Task Force and praised the constructive attitude of Cuban authorities during visits here by delegations from the intergovernmental entity.

Cuban territory has never been used and will never been used to organize, finance or undertake terrorist actions against any country, said diplomatic sources to PL news agency.

Lawmakers Express Rejection of US Blockade Against Cuba

The economic, financial and commercial blockade the United States has imposed to Cuba for more than 50 years is a failed and genocidal policy almost unanimously rejected by the international community today, the island's legislators stated.

The issue of the blockade maintained on Cuba by successive U.S. governments was debated during a hearing of the National Peoples' Power Assembly recently held at the Jose Antonio Echeverria Higher Institute for Technical Studies in this capital.

During the debate, the president of the International Relations Commission at the Legislative, Yolanda Ferrer, stated the extraterritorial nature of that measure to which she described as a failed policy that also lacerates the sovereignty of all States.

The blockade, due to its essence, purposes, impact and political, legal and administrative structure on which it is based, is an act of genocide, in virtue of the Convention for the Prevention and the Sanction of that crime adopted in Geneva in 1948, the legislator noted.

As of very conservative estimates and considering the depreciation of the dollar against the value of gold on the international market, the economic damage caused to Cuba amounted to $1.12 trillion USD... then, what could be said about its social impact and effects, stated Ferrer.

The president of the Commission on Constitutional and Judicial Affairs of the Parliament, José Luis Toledo, said that the destruction of the Cuban Revolution has been the obsession by U.S. administrations, and to try to achieve it, they have tried everything.

Toledo said that that blockade against Cuba is an illegal action in which the U.S. government systematically violates the most elementary norms of international law. And he referred to the world's rejection of this policy expressed by the UN General Assembly for 23 consecutive years.

Cuba's Deputy Foreign Minister, Abelardo Moreno, denounced the implacable persecution of Cuban financial transactions as one of the most visible features of Washington's attempt to overthrow the national economy.

New air routes will operate during the high and winter season of Cuban tourism, from November to April, local authorities of the sector stated here.

The Communication Director at the Ministry of Tourism (MINTUR), Dalila González, outlined a list of connections favoring the increase of travels to that destination.
Cubana de Aviacion is opening a new itinerary from Puerto Rico, adding a 2nd departure from Cancún, Mexico, while Pegas and Nordwind Line to Varadero beach resort are also included in the list, Gonzalez said.

Flights from Air Berlin to Varadero beach resort and the central city of Santa Clara, in addition to Condor plans from Cologne, Germany, will be increased in that period.

Finally, Interjet airline opens travels from Mérida, Mexico, and LOT Airlines, from Poland, will go for the first time to Santa Maria Key in this country's central region.

Best Hotel in Varadero to Operate under Royalton

The Royal Hicacos, number one among the 59 hotels in Varadero beach according to the TripAdvisor Web site, will operate, starting from December, under, Royalton, a brand designed for adults only, and commercialized in Cuba by the Canadian company Blue Diamond.

Miguel García, representative of the group to the island, told the press that the facility is currently undergoing a process of improvements, which includes the remodeling of the main public areas, like the lobby, the night club and the swimming pools.

He specified that once the refurbishing process concludes --the end of which is scheduled for December--, the tourist complex will start operations as Royalton Hicacos Varadero.

Under this brand, Blue Diamond operates a hotel in Cuba, the Royalton Cayo Santa Maria, which occupies position number one in Cuba and the Caribbean, according to the opinions of thousands of users of TripAdivisor.

Four of the six complexes administered by Blue Diamond in Cuban territory are commercialized under the line Memories, with economic offers aimed mainly at the family segment and many recreation services for the general public.

Three years after beginning operations on the island, the northern company is the 3rd chain with the largest presence in this destination, with 6 facilities and 4,000 rooms under its administration preceded by the Spanish Melia (26 hotels) and Iberostar (10 hotels).

Encouraged by a notable rise in Argentine passengers to Cuba at the end of the year, Cuba shows in Buenos Aires its best tourist products and destinations at the Buenos Aires Tourism Fair, FIT 2014.

In the promotion of tourism virtues, Cuba participates in FIT 2014 with executives of tour-operator companies including Cubatur, Gaviota, Cubanacán and Havanatur, as well as Geomedica health travel agency, says Niurka Martinez, director of the Tourism Office for the South Cone.

Due to the worldwide nature of this Fair, Martinez said it is a perfect opportunity to make new commercial contacts and present the novelties in our offers. Niurka Martinez directs public relations with the markets of Brazil, Chile, Paraguay, Peru and Uruguay.

It is the best moment to boost destinations and products, as well as the consolidation of promotional networks in the regional markets. She said that there has been a rise in visitors not only from Argentina, but also from other markets in the Southern Cone.

In all, from those 6 countries, 151 thousand 880 tourists to Cuban destinations traveled in September alone, an incentive figure and a good sign in searching for the immediate future, asserted Martinez, who expressed her hope that the flow of travelers from Argentina will be increased with the opening next January of direct flights to Havana by Aerolineas Argentinas.

53 Brazilian companies, 24 more than the previous edition, will take part in the 32nd Havana International Fair, FIHAV 2014, to open in Havana on Sunday, November 2nd.

Like FIHAV 2013 and in previous events of this type, Brazil will take up 1 pavilion, one of the biggest existing in Expo-Cuba, told Prensa Latina news agency, Hipolito Rocha, General Director of the Havana Office of the Promotion, Exports and Investments Apex-Brazil.

The figure also includes important groups of companies from that south American nation that will present their products in Alimport pavilion, devoted top the firms involved with food.

In this occasion, the Brazilian companies represent a larger group of sectors, including machinery and equipment, footwear, light industry, construction, home supplies, furniture, fashion, agriculture and others.

The wide range of Brazilian products will be exhibited at the Pavilion 20 covering 45 stands, a capacity bigger that those set up in the previous event.

Trade exchange between Cuba and Brazil is diversified and strengthen and as confirmed in the last edition in 2013, the nation is the 2nd largest trading partner of Cuba in the region after Venezuela.

Apex-Brasil in Cuba has the mission of promoting exports of products and services contribute to the internationalization of Brazilian companies while attracting direct foreign investment to Cuba.

Cuba and the Democratic People's Republic of Korea recently signed two agreements on commercial exchange and payments, at the Ministry of Foreign Trade and Investment (MINCEX), in this capital.

Rodrigo Malmierca, Minister of the MINCEX, and Pak Chang Yul, ambassador of that nation to Cuba, signed the agreements, as well as a protocol on the general conditions for the delivery of goods between the two ministries.

After the signing, Malmierca highlighted the bonds of friendship uniting the two nations, a reflection of the historic relations uniting their governments, parties and peoples and urged to continue working with determination to achieve results for mutual benefit.

Pak Chang underlined that the signing of these documents will contribute to diversify Cuba's commercial exchanges.

Tobacco planting in western Pinar del Rio province will use over 15 thousand 900 hectares of land for the 2014-2015 campaign, 115 hectares more than last year, when the local production was well below schedules, particularly due to bad weather.

Tobacco leaf production in Pinar del Rio, the Cuban territory considered as the cradle of Cuban cigars, mostly lies on the shoulders of private farmers and cooperatives, who contribute over 90% of the national production.

The upcoming campaign will be backed by nearly 10 growers grouped in different cooperative modalities operating on the island, as the tobacco plantations in Pinar del Rio contribute the highly demanded cigars that Cuba exports to the world in different brands and shapes.