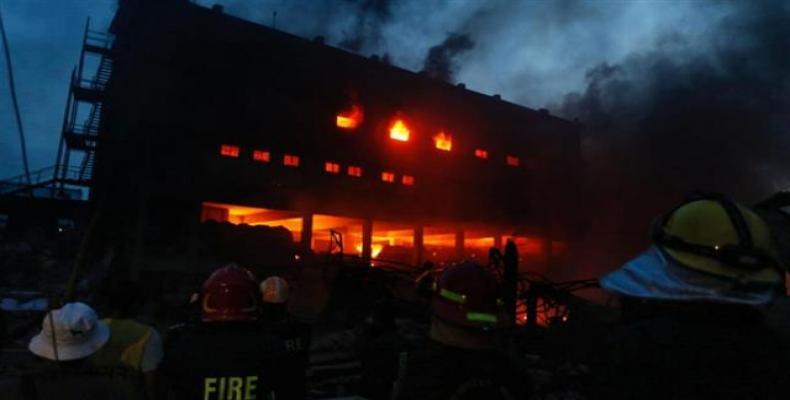 Dhaka, July 4 (RHC)-- At least 13 people have lost their lives and up to 50 others sustained injuries after a boiler exploded at a garment factory in Bangladesh.  The blast on Monday tore through the six-story building of Multifabs textiles manufacturer in the industrial district of Gazipur, north of the capital Dhaka, and caused partial damage to its walls and rooftop.

"It is a terrible scene.  Fire brigade officers have arrived and are doing rescue work.  The factory's boiler exploded and the blast also affected other buildings near the factory," police officer Harunur Rashid told AFP.

The factory is owned by textiles manufacturer Multifabs, which makes clothing for mostly European brands, according to its website.

Eyewitnesses said the explosion was so powerful that it destroyed parts of the factory including "a roof and several walls."  The injured people are being treated at local hospitals and clinics after being rescued with the help of locals, according to the fire service official.  Around 30 workers were reportedly on site at the factory when the explosion shook the whole area and that rescue operation was still underway.

Multifabs started operating in 1992 and reached 20 million dollars in exports in 2010 with 3,500 employees, according to its website.  Bangladesh has more than 4,500 apparel factories with four million mostly female workers at minimum monthly wage of 68 dollars.  The industry in the South Asian country is notorious for poor workplace safety, with many of the factories lacking basic equipment such as ventilation and air coolers.

More than 1,100 workers died in a 2013 building collapse that ranks as the country's worst industrial disaster.