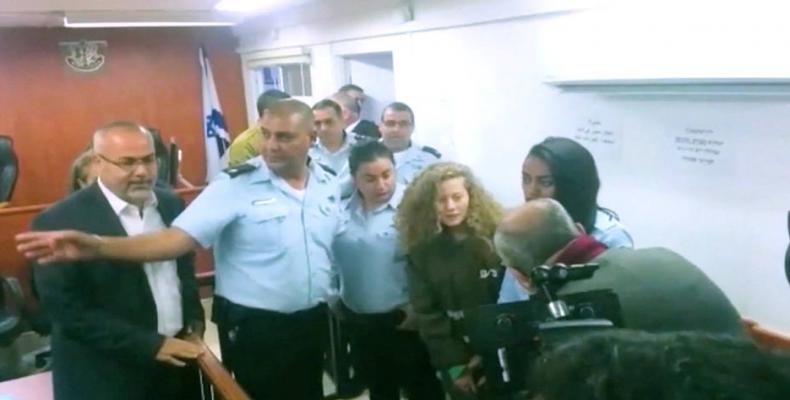 Havana, March (RHC)-- Palestinian teen activist Ahed Tamimi and her mother Nariman were sentenced to eight months in prison and a US$1,500 fine as their legal team accepted a plea bargain with military prosecution on Wednesday.

Ahed and her mother were sentenced in separate trials at the Ofer military camp near Ramallah, with no media or social organizations allowed in. Tamimi's defense team had demanded a public trial, but the military court rejected the appeal.

The plea reduced 17-year-old Palestinian teenager's charges to four counts of assault, leaving out other charges such as stone-throwing.

"At the end of the first session of the hearing Ahed said 'there is no justice under occupation,'" Mariam Barghouti tweeted.

The original indictment included charges going back to 2016, such as assaulting and threatening a soldier, disrupting a soldier and inciting and throwing objects at a person or property.

Tamimi was arrested in December after a video that showed her slapping an Israeli soldier went viral. She has been in administrative detention since then on 12 different charges, including aggravated assault.

Other members of the Tamimi family are also facing charges for opposing the Israeli occupation.