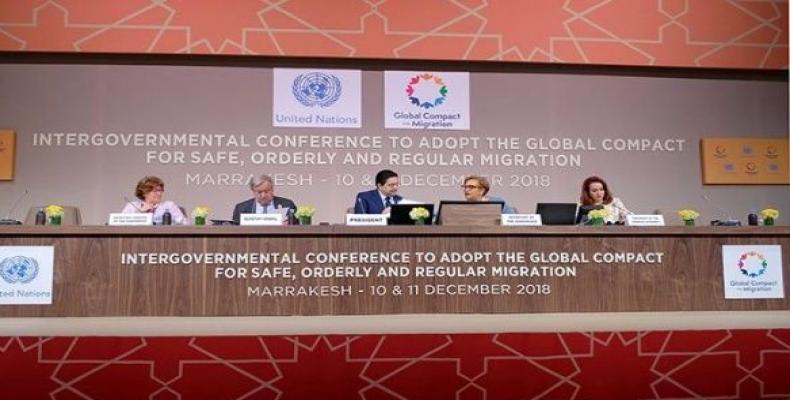 The United Nations Global Compact for Safe, Orderly and Regular Migration (GCM), is  a non-binding agreement that sets a roadmap to better manage global migration flows.

The document was approved at a plenary session presided over by the UN Secretary General, Antonio Guterres; the president of the UN General Assembly, María Fernanda Espinosa; and the Moroccan Foreign Minister, Naser Burita.

According to the UN Secretary General, the document guarantees 'the sovereign right of states to determine their migration policy and their prerogative to govern migration within their jurisdiction, in accordance with international law.'

Guterres regretted the existence of 'falsehoods' about the document and the migratory phenomenon in general.

The president of the General Assembly of the UN, María Fernanda Espinosa, reiterated that the pact is an instrument that adapts to the national needs of states.

'It is a historic moment because we give a human face to migration,' said Espinosa, before adding that states 'however powerful they may be, cannot face the migration challenge alone.'

Fifteen heads of state, eight prime ministers and numerous foreign ministers and officials took part in this meeting on migration sponsored by the UN.

Since then, the text has been criticized mainly by right-wing European politicians who argue that it could increase the migration of African and Arab countries.

Australia, Chile, Italy, Israel and several countries in central Europe have withdrawn from the pact.