One year since assassination attempt on Venezuelan president 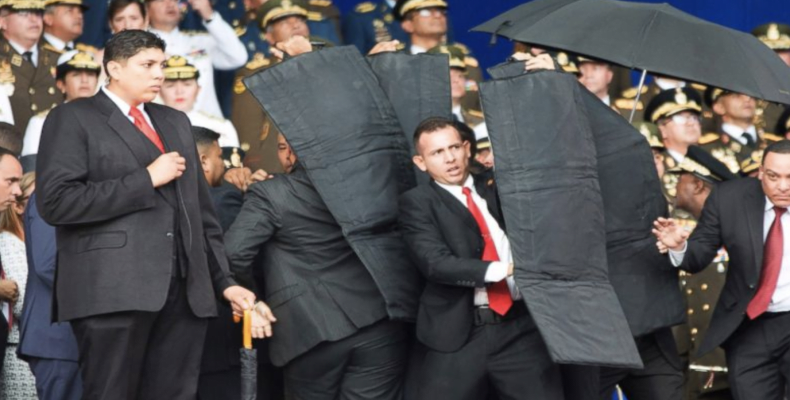 Caracas, August 4 (RHC)-- As Venezuelans commemorated the 82nd anniversary of the Bolivarian National Armed Forces, August 4 also marks a critical day in the country’s recent history.  One year ago, as President Nicolas Maduro was delivering a speech, he was the target of a failed assassination attempt.

"They not only came for me, but they also came for everyone, for the people, and for our country, wanting to undermine the peace and sovereignty of the nation," the president said Sunday remembering the frustrated attempt in a speech from the Military Academy in Caracas.

"But God intervened and like the phoenix, we resurfaced from the ashes of a terrorist attack and today, one year later, I can say that we are standing," he added.  And the Venezuelan president affirmed, once again, that the masterminds were the Colombian and United States governments.

On August 4, 2018, an explosive-loaded drone detonated before reaching a stage where President Maduro was delivering a speech during a military parade in the capital.  At that time, the Venezuelan right-wing opposition and its allies, one of whom was the U.S. National Security Advisor John Bolton, said the explosion was "a montage."

“After the brief moment of confusion, we knew it was an attack.  There were many speculations and lies afterward in the networks but we insisted that it had been an assassination attempt,” Mariela Lopez, a freelance videographer for HispanTV and Xinhua, remembered; as her images, taken in the precise moment of the explosion and the security team's response, were shown around the world.

Despite the evidence, global mainstream media ridiculed the drone attack using qualifiers such as "presumed", "supposed", "confusing event" and "alleged drones."  On August 5, 2018, for instance, CNN en Español titled an article: "The world reacts to the alleged attack against Nicolas Maduro."

However, as time went on the truth surfaced and in March 2019, CNN revealed unpublished images of how such attack was prepared on a Colombian farm, information which was provided by one of those involved in the attempted attack.   The CNN report agreed with the government's assertions about the attack.

CNN then published an interview with a Venezuelan dissident who organized the attack.  He admitted that the objective was to assassinate Maduro, an outcome which involved expecting some "collateral damages."

"[Killing other people] was the risk we had to take," the attack organizer said in response to questions and explained that the drones were purchased online and imported to a Colombian farm, where plotters were training day and night in the handling of the devices.

The Venezuelan conspirator also assured that U.S. government officials had three meetings with the plotters after the assassination attempt occurred.  During those meetings, according to CNN, these officials only "took notes" on the background of the plan and its failure.

On June 11, Venezuela’s Attorney General, Tarek William Saab, informed that 38 suspects have been indicted in the case of the frustrated assassination attempt one year ago.   And as investigations continue, of the 38 linked so far, 31 are incarcerated and seven are in hiding or have received asylum abroad.