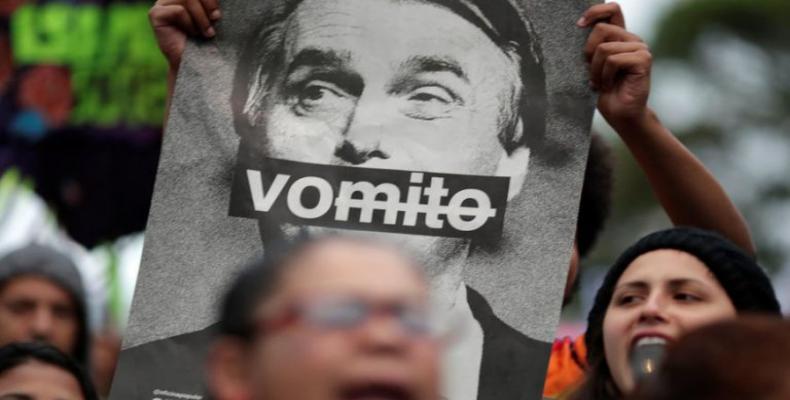 Brasilia, August 28 (RHC)-- At a meeting held in Brasilia on Wednesday, Brazil’s President Jair Bosonaro criticized land reserves allocated to the indigenous peoples and hinted that they are part of a conspiracy to hinder Brazilian economic growth.

“Many reservations have a strategic character.  Someone planned that.  The Indian does not lobby and does not speak our language but, today, he has 14 percent of the national territory.  One of the intentions is to make us unviable,” the former Army captain said without providing further explanations.

During his meeting with governors from the states of the Amazon region, Bolsonaro devoted much of his time to discussing the demarcation of indigenous reserves.  After each governor had spoken, he asked what is the percentage of indigenous demarcations and environmental protection areas in his state, local outlet O Globo reported and added that Bolsonaro called the native people's policies implemented by previous presidents as "irresponsible."

"Policies adopted in the past were irresponsible and used the Indian as a maneuvering mass so that... the Amazon was not under our jurisdiction and was not used for our common good," the far-right president said.  "The environmental question must be conducted rationally and not with that quasi savagery."

In support of Bolsonaro's conception of development, some governors of the Amazonian states also criticized the existence of "too many" indigenous territories.  “Roraima is not Brazil's richest piece of land.  It is the world's richest land.  And both indigenous territories and NGOs are concentrated precisely in areas where we have our wealth,” Antonio Denarium, the governor of Roraima said.

“It's time to put a finger on it, our President, deploying your leadership, courage and team.  We don't want to pull the natives out.  No.  We want the riches lying over there.  To obtain them, we can affect one or two percent of those lands, nothing more than that.  We cannot have a house with a picture worth millions hanging on the wall while our children are hungry,” the governor of Mato Grosso, Mauro Mendes, explained.

“Brazil's greatest riches are in those places: diamonds, niobium, gold, cassiterite and many other minerals.  So, people should know how to use those resources, ”Rondonia Governor Marcos Rocha said.

While the Brazilian ruling class plans the business appropriation of natural resources, the Amazon rainforests continue to burn.  According to Socio-Environmental Institute (ISA), a Brazilian scientific institution which took the satellite images on burning and deforestation outbreaks and cross-referenced them with indigenous lands and conservation areas maps, the top ten indigenous territories most affected by fires are Araguaia, Pimentel Barbosa, Parabubure, Maraiwatsede, Apyterewa, Kayapo, Mundurucu, Areoes, Kanela and Pareci.

Human rights defenders and environmental activists have called on the international community for concrete actions to force Brazilian politicians to respect indigenous territories.

"Fires in the Amazon are not something new... but since Bolsonaro came to power, they reached a critical level, which is directly associated with his hatred rhetoric and politics against indigenous peoples and nature," the spokeswoman of Survival International, Laura de Luis, denounced, as reported by RFI.

"Indigenous peoples are undoubtedly the best guardians of nature: 80 percent of the world's most biodiverse territories are inhabited by them... in the Amazon these small green islands survive within a sea of ​​deforestation."