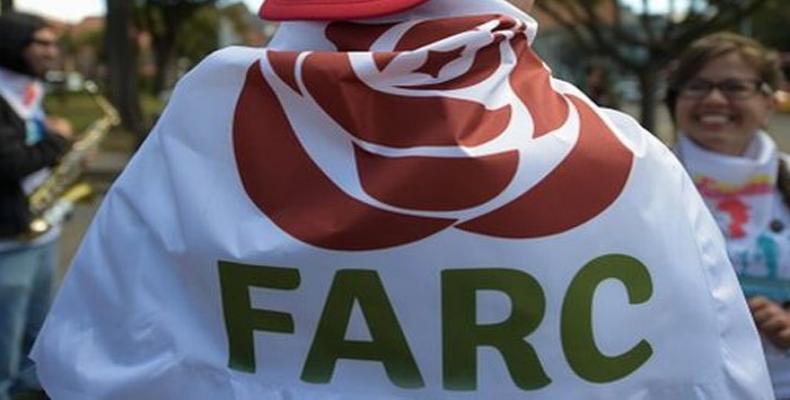 United Nations, October 6 (RHC)-- The United Nations Verification Mission in Colombia (UNVMC) has published a report stating that at least 52 former members of the Revolutionary Armed Forces of Colombia (FARC) have been killed this year, 24 of them being killed between June 27 and September 26th.

"Since the signing of the Peace Agreement in November 2016, the Mission has verified 147 homicides, 12 disappearances and 21 attempted homicides," the UNVMC said.

The report also notes that the attacks on social leaders and human rights defenders remain a matter of great concern. So far this year, social organizations and Colombian state institutions have registered at least 123 murders of activists and social leaders.

"The vast majority of the murders have remained in impunity due to the state's inaction," the United Left leader Enrique Santiago denounces.  The meme reads, “United Left denounces hundreds of murders of Colombian activists and social leaders.  Enrique Santiago, who is responsible for the State and Justice Model group and vice president of the Congressional Justice Commission, has denounced lack of concrete actions.”

With regard to this report, the United Nations Secretary-General Antonio Guterres recalled that "the vast majority" of former FARC guerrilla fighters have embraced the peace process.  ​​​​​​​"They are participating in the peace process, developing positive efforts in collaboration with local communities, attending academic studies, participating in local politics and creating opportunities for their families," Guterres ​​​​​​​said and convened the "comprehensive implementation" of the peace deal.

According to the Agency for Reincorporation and Standardization (RNA), 13,022 former FARC fighters have participated in the peace process, 3,112 of them live at "Training and Reintegration Territorial Spaces" (ETCR), 9,020 are residing elsewhere and 890 have not been relocated yet.

"The reinstatement process sustainability requires that the government, the departmental and local authorities, the FARC and other actors pay more attention to the situation of the more than 8,000 former fighters who reside outside the former ETCRs."

"Among them are former middle-level commanders and emerging leaders," states the report, which will be presented by the UNVMC chief Carlos Ruiz Massieu to the UN Security Council on October 19th.