Israel mapping annexations under Trump's Deal of the Century 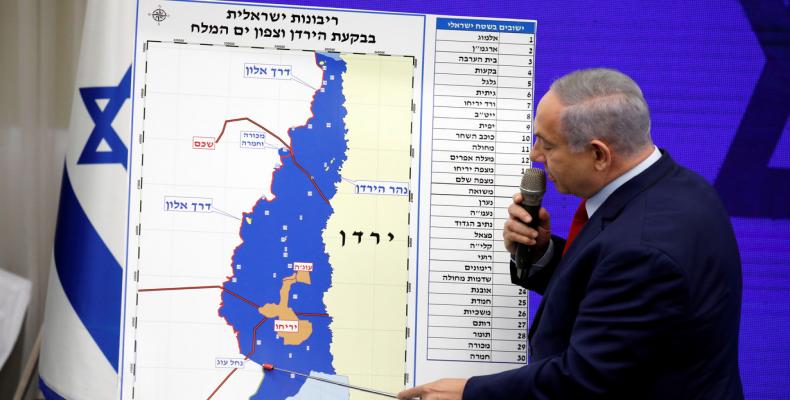 Jerusalem, February 10 (RHC)-- Prime minister Benjamin Netanyahu says Israel has started drawing up maps of the occupied West Bank areas that it wants to annex under US President Donald Trump’s self-proclaimed “deal of the century” for the Middle East.

“We are already at the height of the process of mapping the area that, according to the Trump plan, will become part of... Israel. It won’t take too long,” he said at an election campaign rally in the Ma'ale Adumim settlement near Jerusalem over the weekend.

Netanyahu also stressed that the area Israel plans to annex would include all West Bank settlements and the Jordan Valley.  He had already pledged to swiftly bring the annexation of the aforesaid areas to a cabinet vote following the official revelation of Washington's scheme.

However, after Netanyahu's pledge, Trump's son-in-law and senior adviser Jared Kushner said Washington expected Tel Aviv to wait until after the March 2 general elections before making any moves toward annexation.  It would likely take “a couple of months” to complete work on detailed West Bank maps before Israel will be able to annex settlements and the Jordan Valley, Kushner said.

The Israeli premier further claimed that only he could secure American recognition for Israeli "sovereignty" over West Bank settlements and the Jordan Valley.  “I don’t trust [Blue and White party chairman] Benny Gantz,” he said, referring to his chief political rival.

Netanyahu also hailed a series of pro-Israel measures taken by the Trump administration, including the recognition of Jerusalem al-Quds as the Israeli “capital," the relocation of the American embassy from Tel Aviv to the occupied city, the recognition of Israeli “sovereignty” over Syria’s Golan Heights and the "legalization" of Israeli settlements.

Reacting to Netanyahu's comments, Nabil Abu Rudeineh, spokesman for Palestinian President Mahmoud Abbas, reiterated that his country's map is the one based on the 1967 boundaries with East Jerusalem al-Quds as its capital.

The Palestinian leadership will disregard any alterations to the internationally recognized map of the state of Palestine, he said.  “The map of the State of Palestine is the map recognized by the world in accordance with the United Nations resolutions, and it is the only one that can achieve security, peace and stability in the region and the world," Abu Rudeineh pointed out.  “Any other maps mean the continuation of the [Israeli] occupation and cannot be accepted.”

Trump released his contentious deal during an event at the White House alongside Netanyahu in Washington on January 28th.  The so-called 'Vision for Peace' — which all Palestinian groups have unanimously rejected — largely meets Israel’s demands in the decades-old conflict while creating a Palestinian state with limited control over its own security and borders.

It also enshrines Jerusalem al-Quds as “Israel’s undivided capital” and allows the regime to annex settlements and the Jordan Valley, a fertile strip of land that accounts for roughly one quarter of the West Bank.  The proposal further denies the right of return of Palestinian refugees into their homeland, among other controversial terms.