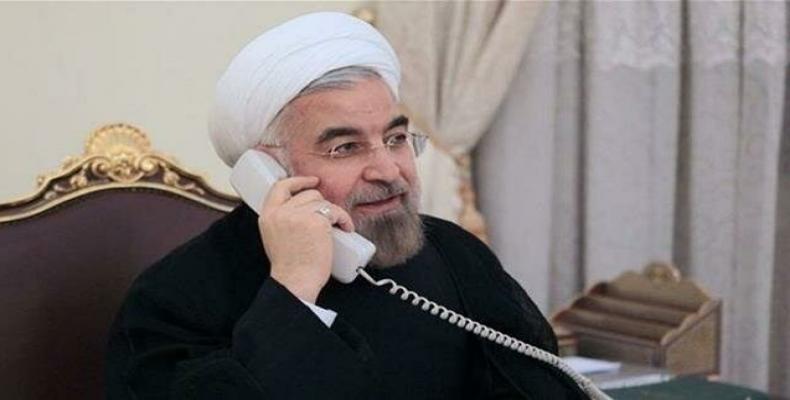 Tehran, August 13 (RHC)-- Iranian President Hassan Rouhani has warned the Europeans against falling into the trap of siding with the United States in supporting a resolution that aims to extend an arms embargo against Iran indefinitely.

Speaking during a telephone conversation with his French counterpart Emmanuel Macron on Wednesday, Rouhani stressed that Europe should not be swayed by the U.S., reiterating Tehran's opposition to Washington's attempts to act against UN Security Council resolutions.

"According to UN Security Council Resolution 2231, the arms embargo on Iran must be lifted as of October 18, and if the United States seeks to act against it, it is a violation of the resolution," the Iranian chief executive said.

Rouhani said that maintaining the 2015 Iran nuclear deal, known as the Joint Comprehensive Plan of Action, and sticking to UNSCR 2231, which endorses the JCPOA, constitute obvious commitments of all countries that remain in the Iran agreement.

He added that Tehran expects close consultations and cooperation between Iran and the three European parties to the JCPOA as well as Russia and China, the other two signatories to the accord, in different forums, including in the International Atomic Energy Agency (IAEA), the IAEA Board of Governors, as well as the UN Security Council, to prevent the opponents of the JCPOA from achieving their goals.

Commenting on U.S. bids to invoke a sanctions snapback mechanism enshrined in the JCPOA, Rouhani said the United States has no right to use the mechanism, given that it left the agreement more than two years ago.

He said the U.S. policy to impose illegal and inhumane sanctions against Iran amid the coronavirus pandemic is "abhorrent" and in contradiction with international regulations and the 2005 enactments by the World Health Organization, and stressed the need for European action in activating economic relations with Iran and cooperating in the fight against COVID-19.

The U.S. has stepped up attempts aimed at extending the UN arms ban on Iran that is set to expire on October 18 as part of the JCPOA.

The administration of U.S. President Donald Trump has repeatedly threatened to trigger the so-called snapback provisions of the 2015 nuclear deal if it cannot secure an arms embargo extension.

Since leaving the JCPOA, the US has been resorting to its maximum pressure campaign against Iran by reinstating its sanctions and persuading others to follow its suit.