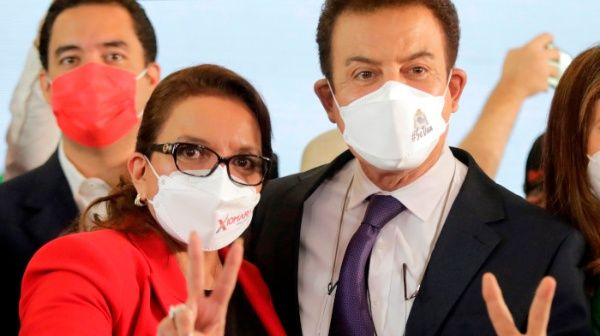 According to polls, the Libre and PSH parties together account for more than 30 percent of the vote intention. | Photo: EFE

Tegucigalpa, October 14 (RHC)-- The Honduran opposition parties Libertad y Refundación (Libre) and Salvador de Honduras (PSH) announced on Wednesday the formation of an electoral alliance, with the purpose of defeating the ruling party in the presidential elections to be held next November 28th.

The new coalition will nominate Xiomara Castro, leader of the Libre movement, as the presidential candidate, while Salvador Nasralla, leader of the PSH collective, will be her running mate.

Holding a press conference, the two politicians underlined that the objective is to remove from power the National Party, whose presidential aspirant is Nasry Asfura.  Salvador Nasralla resigns his candidacy and joins Libre's presidential ticket, as vice president.

To concretize this political union, Nasralla resigned from his party's presidential candidacy, to join Libre's slate, as vice presidential aspirant.  "This important act reflects the will of the people, demanding unity, especially from the opposition in order to defeat this dictatorship", said Castro, wife of Honduran President Manuel Zelaya, ousted from power in a coup in 2009.

Nasralla said: "We are going to govern together, Xiomara will be the president, but she will have me by her side, as first designate, and we are going to make decisions based on what is best for the Honduran people, according to our government plans."

Both politicians said they will work to deploy observers at all polling stations on election day, in order to counter what happened in 2017, when they also participated as an alliance and denounced multiple irregularities in the electoral process.

Between the Libre party and the PSH they add up to more than 30 percent of the voting intention, compared to 20 percent of the ruling party, according to several national polls.