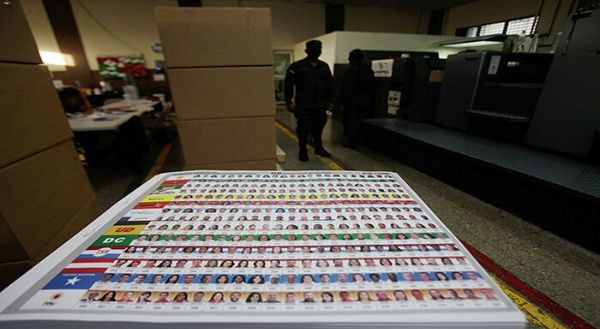 ​​Everything ready in Honduras for the general elections on Sunday. | Photo: Reuters​

Tegucigalpa, November 27 (RHC)-- The U.S. embassy in Honduras has cynically called on Hondurans to respect the results of Sunday's general elections in the Central American country.  The embassy indicated that the National Electoral Council (CNE) of Honduras "will announce the official results of the election according to Honduran law.  We urge everyone to be patient and respect the final results."

The U.S. diplomatic delegation recalled that the Organization of American States (OAS), the European Union (EU) and Honduran civil society organizations will be attentive to the electoral process.  It also pointed out that the presence and deployment of electoral observers is fundamental for transparent and fair elections.

This week Washington sent U.S. Assistant Secretary of State for Western Hemisphere Affairs Brian Nichols to Honduras to call for "transparent and peaceful" elections.  Nichols said on Twitter that "as the Honduran people exercise their democratic right to vote on Sunday, all candidates and political parties should remind their supporters to participate peacefully, remain calm and allow the electoral process to run its course."

In Sunday's general elections in Honduras, 14 parties and 12 presidential candidates will participate.

The National Party (PN), which has been in power since 2010, hopes to continue leading the Central American country through the current mayor of Tegucigalpa, Nasry Asfura.

His main contender is Xiomara Castro, of the Libertad y Refundación (Libre) party, who leads the latest opinion polls and could be the first woman to govern Honduras.

Another candidate is Yani Rosenthal, of the Liberal Party, who spent three years in a U.S. prison for laundering drug money.

More than 5 million people are called to vote in Honduras to elect the president, three vice presidents, 128 deputies to the National Congress and their alternates, 20 to the Central American Parliament (Parlacen), as well as 298 mayors, municipal deputy mayors and councilors.