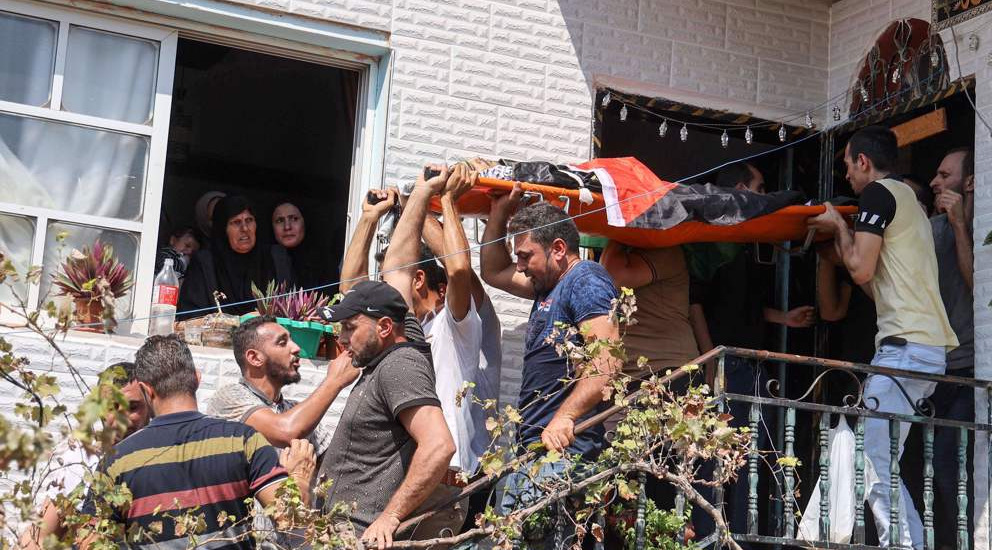 Palestinian women mourn as men carry the body of Alaa Zayoud, 22, member of the Islamic Jihad resistance group, killed in clashes with Israeli forces earlier, during his funeral at his village of Silat al-Harithiyah, east of Jenin in the occupied West Bank.   (Photo by AFP)

Ramallah, May 22 (RHC)-- Israeli forces have used a female Palestinian teenage girl to shield themselves from incoming bullets during a raid in the northern part of the occupied West Bank city of Jenin, an international children rights organization says.

According to the organization's Palestine offshoot (DCIP), the incident happened when the forces raided Ahed’s house in the city of Jenin to arrest her 20-year-old brother.  The raid saw the regime's forces completely evacuating the house before starting to exchange fire with her brother.

Following the evacuation, they ordered Ahed to stand in front of an Israeli military vehicle for two hours to shield the vehicle and its Israeli occupants from incoming fire.  “Bullets were being fired at the military vehicle from all directions,” Ahed told DCIP.

“I was trembling and crying and shouting to the soldiers to remove me because the bullets were passing over my head, but one of them ordered me in Arabic through a small window in the military vehicle, ‘Stay where you are and don’t move.  You’re a terrorist. Stand in your place until you say goodbye to your brother.”

The Israeli forces would not even let Ahed tilt her head to dodge the bullets, but one of the Israeli soldiers ordered her to stand up straight, she added.  After the two hours passed, the Palestinian girl finally managed to run to a nearby tree, where she dropped unconscious to the ground.

“International law is explicit and absolutely prohibits the use of children as human shields by armed forces or armed groups," said Ayed Abu Eqtaish, Accountability Program director at the DCIP, adding, “Israeli forces intentionally putting a child in grave danger in order to shield themselves constitutes a war crime.”

Israeli military forces have shot dead a Palestinian teenager and injured another during a raid on the Jenin refugee camp in the northern part of the West Bank.
The Israeli forces also fired barrages of rocket-propelled grenades at the house, which caused it to catch fire, and unleashed volleys of live bullets at it.  They left the area about three hours later after detaining Ahed’s brother.

Ahed was transferred by private vehicle to Jenin Hospital and was treated for “intense mental stress and a severe lack of oxygen,” the official Palestinian news agency WAFA reported.

Since the year 2000, DCIP has documented at least 26 cases involving Palestinian children being used as human shields by the Israeli army. Only one of those cases led to the conviction of two soldiers for “inappropriate behavior” and “overstepping authority.”  Both were demoted in rank and given three-month suspended sentences.