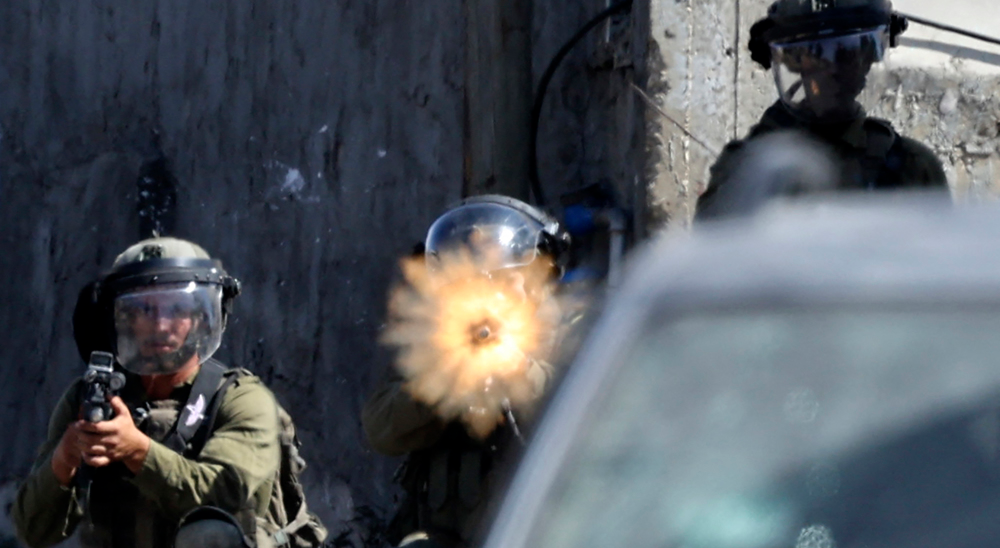 Israeli soldiers take position amid clashes with Palestinian demonstrators following a protest against expropriation of Palestinian land in the village of Kfar Qaddum in the occupied West Bank, near the illegal settlement of Kedumim, on September 30, 2022. (Photo by AFP)​

Geneva, October 1 (RHC)-- Iran’s permanent representative to the United Nations Office and other international organizations in Geneva has censured the ongoing ethnic cleansing by Israeli military forces across the occupied Palestinian territories, saying the practice has become a permanent and deliberate policy of the occupying regime.

Ali Bahraini made the remarks at a Human Rights Council’s general debate on the human rights situation in Palestine and other occupied Arab territories.  He emphasized that Palestinians are subject to long-standing gross violations of human rights under the rule of a military apartheid system.

“The use of lethal military force against Palestinians, their persecution, ethnic cleansing, expansion of illegal settlements and collective punishments have become a permanent practice and deliberate repressive policy of the Zionist regime since the very beginning of the occupation of Palestine,” the Iranian diplomat said.

Iran's UN envoy went on to refer to the two key elements of a report compiled by the Independent International Commission of Inquiry on the crimes committed by Israel in Palestinian lands, saying that “permanent occupation” and “lack of accountability” can best explain why the Middle East region has been beset with decades of insecurity and violence.

Bahraini then lambasted the deceitful behavior of the so-called advocates of human rights, emphasizing that their silence on the Israeli regime’s actions across the occupied Palestinian territories is highly hypocritical.  “These countries are actually complicit in war crimes and crimes against humanity being committed in occupied Palestine, and share responsibility for crimes being perpetrated by the [Zionist] regime military apartheid in Palestine,” the Iranian diplomat said.

Bahraini underlined that debates on Israeli crimes should focus on the agenda of the Human Rights aCouncil, remain a true manifestation of global demands for realization of truth and justice for Palestinians, express solidarity for the cause of free Palestine, and become a clear manifestation of a globally collective demand to hold the occupying apartheid regime of Israel accountable for its violation of international principles and humanitarian rights.

The remarks came two days after a Palestinian boy died of heart failure on Thursday while being chased by Israeli soldiers in the occupied West Bank.  Seven-year-old Rayyan Suleiman was coming home from school with other pupils in the town of Tuqu’ when troops gave chase, and he “died on the spot from fear,” his father Yasser said in a video circulated on social media.

A medical official who inspected the body said that it bore no sign of physical trauma and that the death appeared consistent with heart failure.  The Palestinian Foreign Ministry condemned the incident as “yet another ugly crime” by the Israeli regime.

Israeli forces have recently been conducting overnight raids and killings in the northern occupied West Bank, mainly in the cities of Jenin and Nablus, where new groups of Palestinian resistance fighters have been formed.

More than 150 Palestinians have been killed by Israeli forces in the Israeli-occupied territories since the start of the year, including 51 in the besieged Gaza Strip during Israel’s three-day onslaught in August.  More than 30 of those killed were either from Jenin or were killed in the Jenin region.