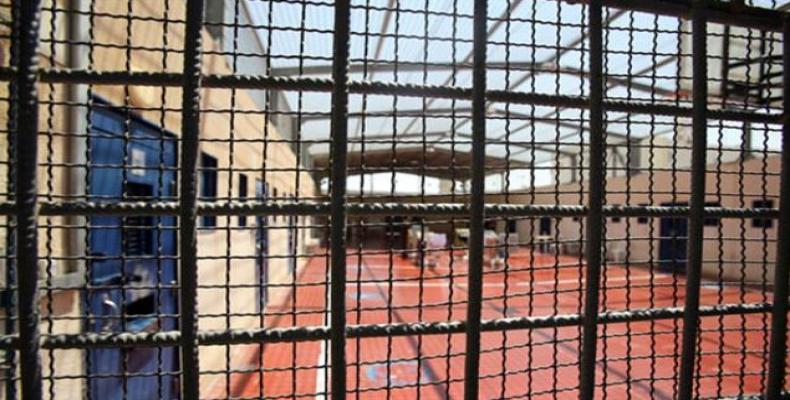 Tel Aviv, February 26 (RHC)-- Israel has enforced severe measures against Palestinian Islamic Jihad prisoners, transferring them from Raymond jail in Negev desert to Ela prison in Be'er Sheva. The punishments include solitary confinement for 21 days and fines of up to 450 shekels for each prisoner, the Palestinian Prisoners Society (PPS) reported on Wednesday.

Meanwhile, the Israeli forces stormed Section 3 of Raymond prison, preventing inmates from leaving their rooms in order to punish them for expressing solidarity with Jihad detainees.

Tension has flared up after a Palestinian captive held in Raymond jail stabbed an Israeli officer on Monday to protest the cruel Israeli measures against Palestinian detainees. After the stabbing, Israeli forces stormed Section 4, mostly filled with Hamas and Islamic Jihad detainees, beat the inmates up and pepper-sprayed them.

Earlier on Thursday, tension swept across Raymond lock-up after Israeli authorities decided to transfer Hamas leader, Jamal Abu al-Hayja, and another member of Islamic Jihad Movement, Zayd Bseiso. The decision was denounced by inmates, who considered it as a violation of an earlier deal struck with prisoners that banned inter-prison transfers.

Reports say around 7,000 Palestinians are held in Israeli jails, many of them without charge or trial. The Israeli Prison Service has come under strong criticism from human rights groups for rampant rights abuses in jails.