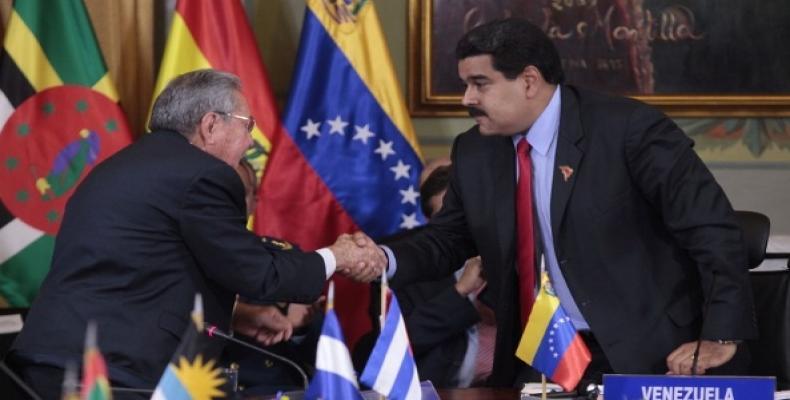 Caracas, March 18 (teleSUR-RHC) The heads of state and governments of the Bolivarian Alliance of the Americas (ALBA) expressed their support for the governments of Cristina Fernandez of Argentina and Dilma Rousseff of Brazil during an extraordinary summit of the leftist regional bloc on Tuesday.

Fernandez and Rousseff, two female presidents of South America, have been subject to campaigns aimed at destabilizing their governments. President Fernandez has been contending with an opposition that is seeking to link her to the untimely death of prosecutor Alberto Nisman earlier this year. Nisman was investigating the 1994 bombing of a Jewish community center in Buenos Aires.

President Fernandez denies any involvement and a court found that Nisman's accusations that Fernandez was involved in a cover-up of the bombing to be baseless. In response, ALBA leaders in the final declaration said, “we express our deepest words of solidarity and support for the president of the Argentine Republic, Cristina Fernandez de Kirchner and the rest of her government officials, who are being subjected to a campaign of personal and institutional discrediting by a section of the political and media right-wing in her country, at the same time as they are being attacked by vulture funds and international financial capital.”

The government of Argentina has also been fighting a group of financial speculators, also known as vulture funds. The hedge funds did not lend to the country, but rather bought hold out debt following Argentina’s debt renegotiations, and have been attempting to extort over a billion dollars from the government through U.S. court rulings.

The opposition in Brazil has also been working to destabilize the government of Dilma Rousseff by calling for impeachment proceedings against the president, who was re-elected late last year by a margin of some 4 million votes. The opposition, in concert with hostile private media outlets, have been trying to tie to a scandal involving the state-run oil company Petrobras, despite the fact that she has been cleared of any involvement.

Government supporters say the opposition is inventing a crisis to remove President Dilma Rousseff from power, with some protestors openly calling for a military coup. The heads of state and government of the ALBA member states said that they “reiterate the strongest support for the democratically-elected and legitimate government of the president of the sister Federative Republic of Brazil, Dilma Rousseff.” ALBA, founded by late Venezuelan president, Hugo Chavez along with former Cuban president, Fidel Castro, is an 11-country alliance of American and Caribbean countries that work to promote solidarity and reciprocity over competition.

During the summit, the bloc also issued a statement rejecting U.S. President Obama's executive order declaring Venezuela a threat to U.S. national security and called on the U.S. government to repeal the order.