Conference for the Full Normalization of U.S.-Cuba Relations Ends in New York with Commitment to Continue the Struggle 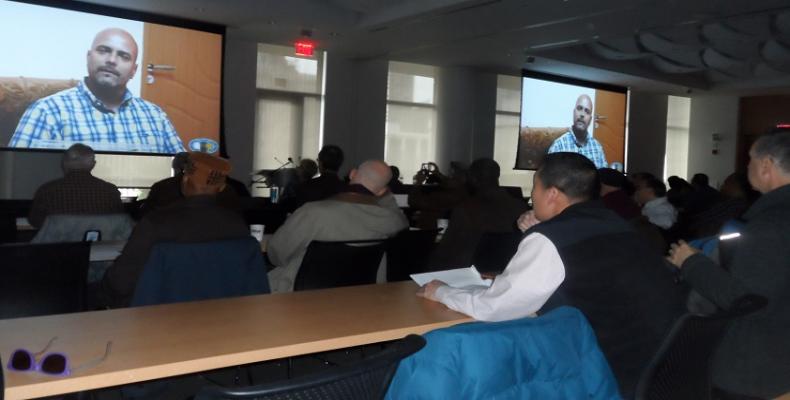 New York, March 28 (RHC)-- In the United States, a conference that brought together participants from across the United States and Canada, as well as Puerto Rico, has wrapped up in New York City.

More than 200 solidarity activists and other concerned citizens met for two days to discuss issues related to normalizing relations between Cuba and the United States. Among the special invited guests in attendance were representatives of a delegation from the Federation of Cuban Women, and the First Secretary of the Cuban Mission to the UN, Rolando Vergara Zito.

One of the Cuban Five, Gerardo Hernández, sent a video message from Havana, thanking those who helped put pressure on U.S. authorities for their release from U.S. prisons.  Gerardo said that the struggle must continue for an end to Washington's illegal occupation of Guantanamo, the lifting of the U.S. economic blockade against the island, and for an end to all regime change programs against Cuba.

The National Conference for the Full Normalization of U.S.-Cuba Relations was held over the weekend at Fordham University in New York, with panel discussions and debates -- including workshops on technology and digital media support for Cuba and the solidarity movement, Cuba's health care system, the revolutionary legacy of Fidel Castro, and Cuba's support of African liberation and independence.

The conference also featured a public rally -- with speakers including Anayansi Rodriguez, Cuba's Permanent Ambassador to the United Nations; Sandra Ramírez, the North America Director for ICAP, the Cuban Friendship Institute; Andrés Gómez, coordinator of the Antonio Maceo Brigade; and Rafael Cancel Miranda, a Puerto Rican independence fighter who suffered more than a quarter of a century in U.S. prisons.

Participants at the conference agreed on the need for united, coordinated actions to continue on the path to full normalization, emphasizing that there is the need for a strong movement in the U.S. that will push for positive change in relations between our two countries.