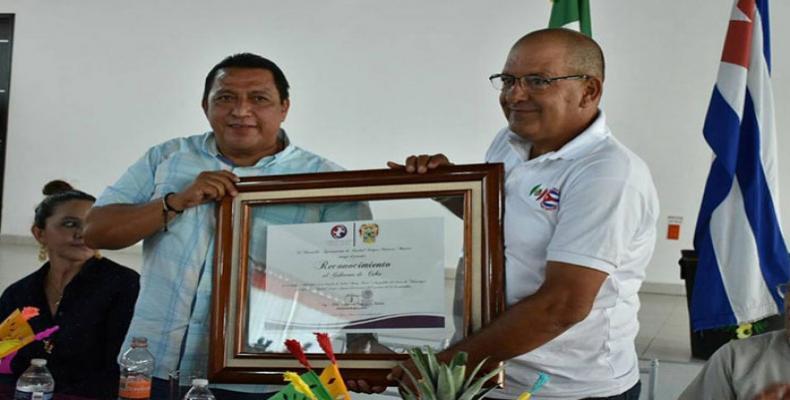 Havana, November 16 (RHC-ACN)-- The 40 Cuban health professionals who helped the victims of the last September's earthquakes in Mexico, returned today to Cuba after a moving good-bye filled with endless expressions of gratitude by the authorities and the population of the City of Ixtepec, in the state of Oaxaca.

Marcia Cobas, Deputy Minister of Public Health, welcomed that brigade in Terminal Five of the José Martí International Airport in Havana. This was the 27th group of the Henry Reeve International Brigade of Doctors Specialized in Disaster Situations and Serious Epidemics, created by Commander in Chief Fidel Castro in 2005.

Coba congratulated them on behalf of the Minister for having satisfactorily fulfilled the mission entrusted by the leadership of the Communist Party and the Cuban government, in little more than a month of hard work and in a region in need of assistance services, because its main hospital was affected, she said.

“With your field hospital and specialists you worked intensely to provide care to this population that will remember you forever, because only professionals like you, altruists, revolutionaries, committed to the human being and the work they do, can leave their homes, their work, and go to a land devastated by the earthquake,” she told them.

Dr. Rolando Piloto, head of the brigade, reported that in the 45 days of their stay in Mexico, they treated 13,392 patients and performed 152 surgeries, 2,638 nursing procedures, 2,308 clinical laboratory examinations, 1,115 ultrasounds and 13,544 educational activities.

The Cuban brigade offered services of Internal Medicine, Pediatrics, Surgery, Gynecology, Orthopedics and Traumatology and Psychiatry, among others, in a rural region of the State of Oaxaca, one of the poorest in that country and one of the most devastated by the September earthquakes.

In addition to doctors, the group was made up by nurses, epidemiologists, graduates in clinical laboratory, physical medicine and rehabilitation, electromedicine and a psychologist, who in statements to the ACN agreed to have lived an unforgettable experience.

They returned to Cuba not only happy to have saved lives, but loaded with anecdotes, stories of life and above all expressions of gratitude of many of the people they treated.