Vice president of Namibia in Cuba for anniversary of Cassinga Massacre 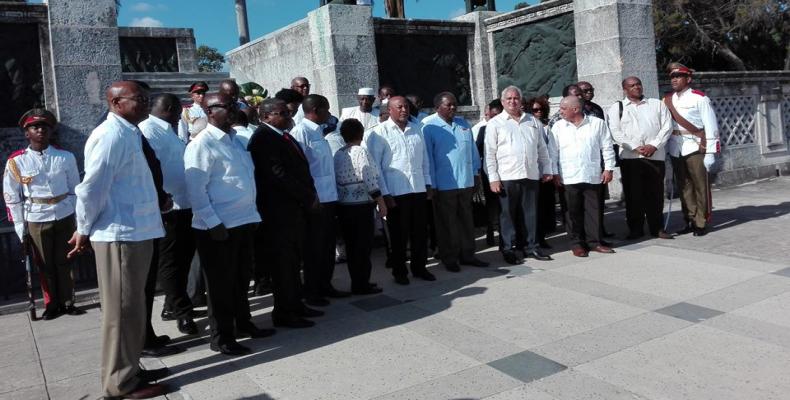 Havana, May 4 (RHC)-- The Vice President of the Republic of Namibia, Nangolo Mbumba is in Cuba to participate in functions marking the  40th anniversary of the Cassinga Massacre.

The massacre by South Africa of Namibian refugees in Angola occurred  on May 4, 1978.  More than 600 Namibians, mostly women and children, were killed on that day and hundreds more were wounded.

Cuban doctors in the nearby Angolan town of Techamutete provided care for the wounded.

Two days before the South African raid, UNICEF had reported of a "well-run and well-organized" but "ill-equipped" camp at Cassinga, seeking to cope with a rapid Namibian refugee increase.

A few weeks after the massacre, six hundred Namibian children, most of whom were survivors of Cassinga, arrived in Cuba to study. Cuba opened its doors widely and generously to the Namibian refugees.

In related news, Angolan President João Lourenço is in Namibia to participate in the 40th anniversary ceremonies of the massacre, being marked this Friday.

The Angolan and Namibian governments have committed to building two monuments in the towns of Cassinga and Chetequera, today Huila and Cunene respectively, in honor of the victims.

The attack on Cassinga, code-named "Operation Reindeer," was the second largest military offensive of the racist South African army in Angola after their so-called "Savannah Operation." In addition to the massacre at the refugee camp, South Africa continued its onslaught with the sending of hundreds of paratroopers into the nearby town of Chetequera.

The decision to build the Cassinga and Chetequera monuments was announced by the presidents of Angola, Joao Lourenco, and of Namibia, Hage Geingob, during a joint press conference in Windhoek on Thursday.

Angola was the main platform for the liberation struggle of Namibia, which proclaimed its independence from South African occupation on 21 March 1990. Angola and Namibia share a land border of more than a thousand kilometers.

Cuban military assistance to Angola safeguarded that nation's independence and was instrumental in forcing South Africa to end its occupation of Namibia.