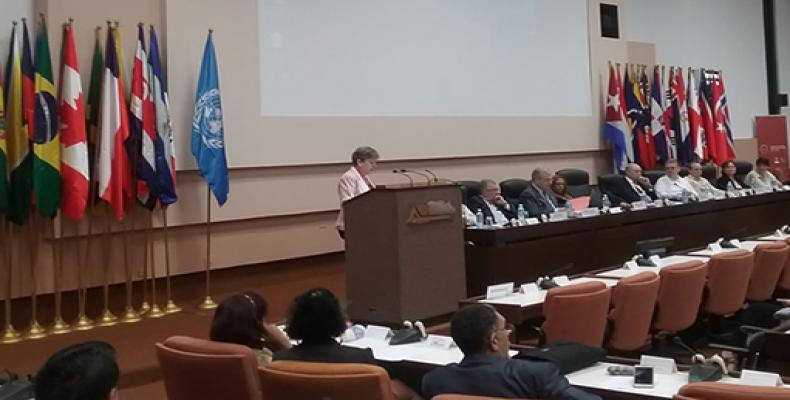 Havana, May 8 (RHC)--The Executive Secretary of the Economic Commission for Latin America and the Caribbean (ECLAC), Alicia Bárcena, reaffirmed on Monday the United Nations regional organization’s commitment to accompanying Cuba, and all the organization’s member countries, on their own journey toward sustainable development.

Barcena spoke during National Day prior to the inauguration of the thirty-seventh session of ECLAC, which was dedicated to the host country of the gathering taking place through Friday, May 11, in Havana.

During the event,  organized by the Cuban government to analyze ECLAC’s contribution to the economic and social thinking of Latin America and the Caribbean, Alicia Bárcena expressed appreciation for the progress made in Cuba on implementation of the 2030 Agenda and its commitment to a comprehensive approach to development.

“ECLAC, as well as the government of Cuba, have both pointed on numerous occasions to the importance of a comprehensive approach to development, which is to say, development in which the economy advances, with social progress and respect for the environment, which gives rise to sustainable development,” the regional Commission’s highest representative stated.

In her remarks, Barcena highlighted the historical relationship between ECLAC and Cuba, in which mutual respect and trust have prevailed.

National Day was inaugurated by Rodrigo Malmierca, Cuba’s Minister of Foreign Trade and Investment, who affirmed that regional body´s session in Havana has a singular relevance due to the pertinence of the issues that will be addressed, ECLAC´s role in the development of Latin America and the Caribbean and its coincidence with the regional organization’s 70th anniversary.

In addition, he stressed the importance of the debates that will take place this week, centered on ECLAC’s position paper “The Inefficiency of Inequality”, which the regional Commission will officially present on Thursday.

Malmierca added that in the last seven decades “ECLAC has not only been present, it has been a protagonist, providing support and serving as a leader of economic-social thinking in Latin America and the Caribbean.”

ECLAC’s thirty-seventh session will be officially inaugurated by the United Nations Secretary-General, António Guterres; the regional organization’s Executive Secretary, Alicia Bárcena; the Chief of Staff of Mexico’s Office of the President, Francisco Guzmán; and a Cuban authority.