Venezuelan president in Havana to participate in ALBA Summit 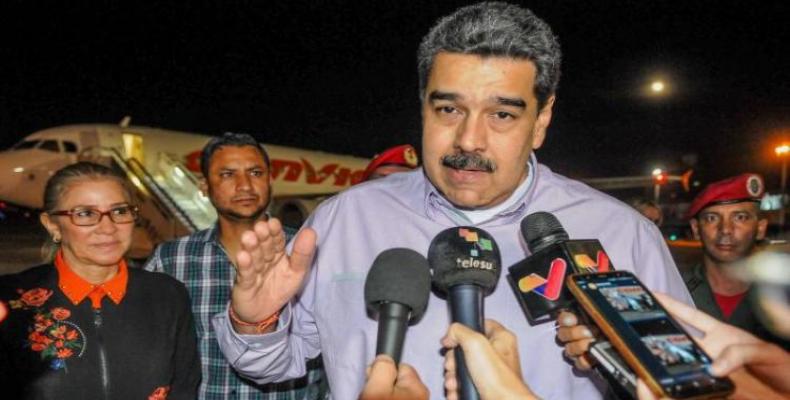 Havana, December 14 (RHC)-- Upon his arrival in Havana for the 17th Summit of ALBA-TCP, Venezuelan President Nicolas Maduro affirmed that "during such a complex moment for Latin America and the Caribbean, this ALBA Summit brings a message of hope and unity to all those who struggle."

The Summit of the Bolivarian Alliance for the Peoples of Our America-People's Trade Treaty (ALBA-TCP) is being held in the Cuban capital on Saturday.  Regarding the agenda of the meeting, the Venezuelan president pointed out that one of the issues will be the economy of the countries of the bloc, in view of the constant attacks from Washington through financial persecution, international trade and oil.

Arriving at Jose Marti International Airport in Havana, Maduro told reporters that there is a great struggle for the future path of our peoples and the battle will have a favorable result for the peoples of Latin America and the Caribbean.

The Bolivarian leader recalled the meeting between Fidel Castro and Hugo Chávez on December 13, 1994, and described the embrace between the two leaders as the beginning of a new era for resistance and patriotic and revolutionary fortitude that fills many in the region with hope for a better future.

Nicolas Maduro said that the foreign ministers of the member countries have worked on some proposals to relaunch initiatives such as the ALBA Bank as a great financial entity for the development of the region; to promote and reinforce initiatives such as the People's Trade Treaty and trade within ALBA, the Caribbean and Latin America.

With the participation of several heads of state, Havana is hosting this Saturday the XVII ALBA-TCP Summit, which has established the current situation in the region and the role of the Alliance in this context as fundamental topics for debate.