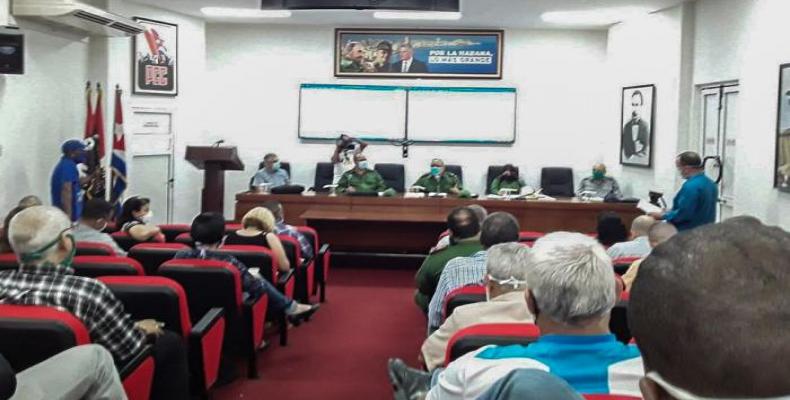 Havana, June 2 (RHC)-- Members of the Provincial Defense Council (CDP) in Havana examined this Tuesday compliance with the measures taken to fight COVID-19 in the Cuban capital, the area that reported at the close of June 1st, 9 cases with the disease, all of them diagnosed in Havana.

Among the measures examined are the protocol for attention to people who do not respect social distancing and leave their homes unnecessarily.  Reinaldo Garcia Zapata, vice-president of the Defense Council, referred to the case of the AICA laboratories, which explained that the transmission episode that occurred in that workplace by a person, who is currently asymptomatic.

So far, with the tests carried out, the figure exceeds 40 workers at the site positive to the disease, most of them in the packaging area.   On this particular case, Luis Antonio Torres Iríbar, president of the CDP, called for further investigation of all possible contacts, in order to identify them and cut the chain of transmission.

In this sense, variants were analyzed to maintain the vitality of the laboratories, with the objective that the industry can maintain the production of the necessary medicines for the country, for which, all the workers who enter these areas must have negative results of the PCR tests.

The president of the CDP called for conclusions as to why in Havana it has become necessary to reinforce security measures, since a case in one workplace can branch out to others, as well as to municipalities and even provinces, as is the case with Artemis.

Likewise, he insisted on looking for the contacts of the contacts and the chain of relations of each one, because, he explained, one cannot be afraid to look, since that is the only way to cut the transmission.