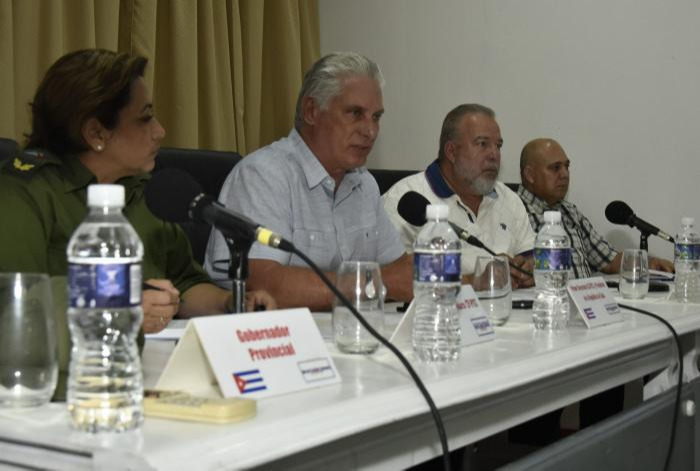 Matanzas, August 9 (RHC)--Cuban President Miguel Díaz-Canel Bermúdez said it is necessary to continue reinforcing unity in work and the willingness and capacity for victory that characterizes the Cuban people in the face of adversity.

"Unity is something that distinguishes us and one of the values of our society," he stressed while checking the actions to confront the fire of great proportions in the industrial zone of Matanzas.

He affirmed that the event had moved the country because Cubans, firefighters, and workers offered their lives in the first moments to face this situation and that there are families who grieve for these human losses.

"That has to be honored, and the best way is with the greatest efficiency," he said.

He recognized the heroic effort of those who, despite the fatigue, the high tension, and the danger, were engaged in the challenging task of putting out the fire at the Supertanker Base, an episode of high social and economic repercussion.

Diaz-Canel praised the work of the Revolutionary Armed Forces, the Ministry of the Interior, rescuers, and firefighters. Their work has been decisive, he said.

He thanked the cooperation of Venezuela and Mexico and those who have expressed their willingness to help, demonstrating that Cuba is not alone or isolated.

He mentioned the generosity of Russia, which asked Cuba to send it the need to help face the fire, and the gesture of understanding of Pope Francis, eager for us to overcome this situation.

He considered the balance achieved in these tense days of hard work as a feat and affirmed that there is no uncertainty but hope that we will overcome it.

The Minister of Public Health, José Angel Portal Miranda, said that 125 people had been treated, with 101 discharged. Of the 24 hospitalized, two are in critical condition, two in serious condition, and 17 are in care.

Mario Sabines Lorenzo, vice-president of the Provincial Defense Council, announced that 4,800 people had been evacuated from the areas closest to the disaster and that the territory has received 22 donations, mainly food, for the evacuees and those who are fighting the disaster.

Elba Rosa Pérez Montoya, Minister of Science and Technology,  said that for the moment, there is no evidence of any damage to human health. However, she acknowledged that this is a highly complex natural impact and that it is not yet over.

It was reported that the Antonio Guiteras thermoelectric plant was shut down due to the contamination of the water cycle, although it was estimated that it would be synchronized to the national energy system on Tuesday morning.

The member of the Political Bureau and Prime Minister Manuel Marrero Cruz, and Susely Morfa, president of the provincial Defense Council, attended the meeting.