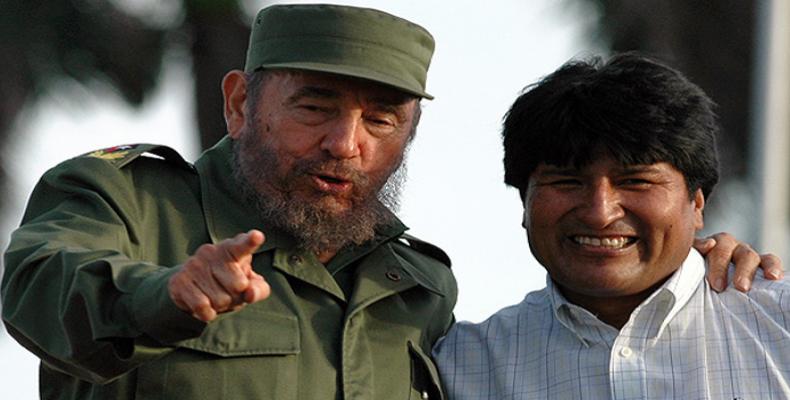 Havana, August 13 (RHC-PL) -- The president of Bolivia, Evo Morales, arrived in Cuba late Wednesday night to participate in Fidel Castro's birthday celebration. “I am very happy to come and be accompanied by our foreign minister (David Choquehuanca) to share and accompany our older brother Fidel Castro on his birthday,” said the Bolivian president upon his arrival at the Jose Marti International Airport in Havana.

“I admire and love him, I learned a lot from him during my trade union leadership, when I was a lawmaker and now president, so I decided, and hopefully not presumptuously, to come voluntarily and accompany him on his birthday,” added Morales.

Cuba has planned a massive celebration with concerts and tributes to the Cuban leader for this birthday this Thursday.

Morales also highlighted the great success and unity of the Cuban people and the world that, in his opinion, made possible the restoration of diplomatic relations between Cuba and the United States. This unity was also aided by the Pope's recent visit to South America and upcoming visit to Cuba.

“We also welcome the contribution of our brother Pope Francis who unites two peoples,” Evo said. “It is my great desire that one day Pope Francis will also unite Chile and Bolivia, however we value these historical facts that restore diplomatic relations,” added the Bolivian president, referring to the territorial conflict between the two South American nations over access to the Pacific Ocean.

Despite praising the improved relations between Cuba and the U.S, the Bolivian president also criticized the U.S. government for attacking member countries of the Bolivarian Alliance for the Peoples of Our America (ALBA).

He accused Washington of international interference, particularly in countries such as Ecuador, Venezuela and Argentina. He also expressed his admiration for the governments and social movements of the south that continue to defend the democratically-elected presidents in the region.

“[Governments of the south] are consistently being attacked with political and economic assault, with character assassination attacks aimed at legislators, attacks and threats from the United States against some ALBA countries,” said Evo Morales.

He also emphasized his support for Ecuador, where right wing opposition and some indigenous groups have recently tried to mobilize against President Rafael Correa for proposed tax increases.

Evo Morales said: “We are mobilized to defend this democratic revolution.”