Center for Molecular Immunology Is Leader in Cuban Biotechnology 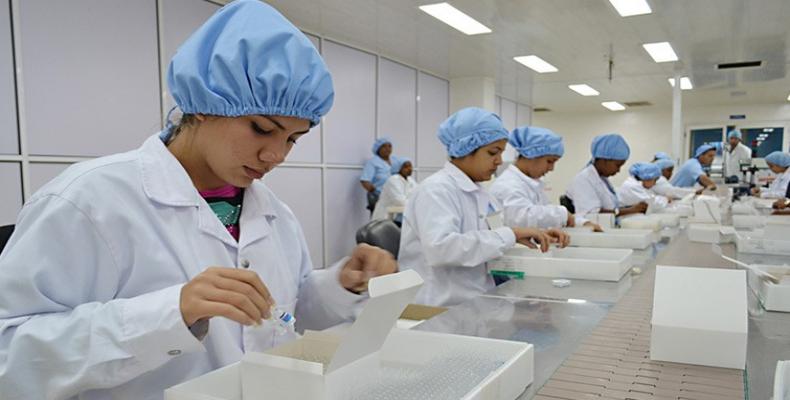 Inaugurated by Cuban Revolution leader Fidel Castro 20 years ago, the Center for Molecular Immunology exhibits a new productive scientific organization. It works as an industrial plant, as well as a production and health center. It is currently part of the company Bio-Cuba-Farma, a qualitative leap in the new Cuban economic model, according to its Director General, Agustín Lage.

“And if we were to draw a fundamental, an essential message, it would be twenty years of history as told by our colleagues. That message is the slogan repeated during the Special Period by our leaders: "Yes, we can". I think the key message of these twenty years is that it is possible to develop a biotech industry in Cuba, that can export, and that is linked to science, with production scaling. We can do it and that's the message.”

Developing certified quality drugs, the center exports pharmaceutical products to over 30 countries with specific requirements and an appropriate regulatory system. It has over one hundred health records of drugs. So, there is a high availability for domestic production, according to the biotechnologist Ernesto Chico.

“In Cuba there are more than 3 thousand patients who need Eritroproyetine. We manufacture Eritroproyetine today for more than 80 thousand patients. The fact that we manufacture for large countries, for a large population, makes it cost effective for what we need to supply to Cuban patients. The availability we have for Cuban patients is very high because it is the same standard of production, it is a given site, the same system that exports and guarantees at the same time.”

With 30 basic research projects, the Center for Molecular Engineering works on cancer immunotherapy, on molecular vaccines, antibodies and cell engineering, bio-informatics and regulation of the immune response. It has a broad portfolio of products and recognized patents which have given us about 40 million dollars in tangible negotiations. Meanwhile, the center is working on the most common diseases in the world and in Cuba, with a heavy emphasis on cancer, according to Tania Crombet, director of clinical research. She also explained the link with national institutions and clinical trials abroad.

“In these twenty years, we have also conducted 40 clinical trials outside of Cuba, that have required permission from the regulatory agencies, from the ethics committees of hospitals and also approval of those research sites. And I emphasize that they are sometimes called highly regulated countries, first world countries. We have trials in Canada and in the United States; we have a license for clinical research in Europe and in Japan. We also have trials in Brazil and Mexico.”