A friendly voice around the world

Havana, September 8 (RHC)-- Cuban Foreign Minister, Bruno Rodríguez Parrilla, and the High Representative of the European Union for Foreign Affairs and Security Policy, Federica Mogherini, stressed in Havana this Sunday the good status of relations between Cuba and the EU and the importance of the Political Dialogue and Cooperation Agreement, signed at the end of 2016, as a regulatory framework for consolidating ties between the two parties.

Rodriguez Parrilla wrote on Twitter that in addition, at the meeting both discussed the new US blockade measures against Cuba and other issues on the international agenda.

Rodríguez welcomed the senior European official at the headquarters of the Cuban Ministry of Foreign Affairs, on the eve of the second Joint Council to be held in Havana by delegations from the island and the EU, which will deal with issues such as cooperation and future dialogue on sectorial policy, trade and investment, including the Helms-Burton Act.

Mogherini, who began an official visit to Cuba on Friday, chairs the European bloc delegation to that meeting.

As part of her agenda this Sunday in Havana Mogherini and her delegation visited the facilities of the former Convent of Santa Clara, currently undergoing a full restoration under the guidance of the Office of the Historian of Havana and financing of the European Union. 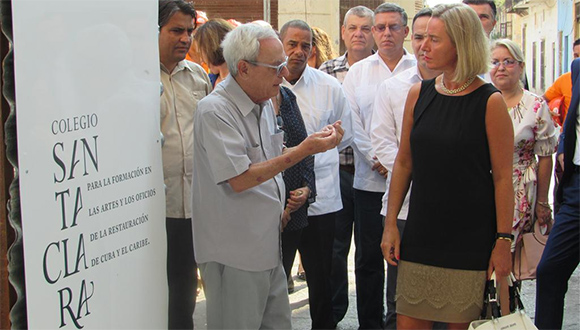 Once the reconstruction is completed, the facility will become a Center for academic training in arts and crafts of restoration and conservation of the Heritage of Cuba, the Caribbean and the Antilles, under the name of College of Santa Clara.

The tour was guided by the Historian of the City, Eusebio Leal Spengler.

The Convent of Santa Clara is the third social work developed jointly in Old Havana by the Historian´s Office and the EU, after the Center for the Interpretation of Cultural Relations Cuba-Europe, in the former Palacio del Segundo Cabo, and the Center for Teenagers.