South Africa Health Minister: Role of Cuban brigade has been invaluable and immeasurable in the fight against COVID-19 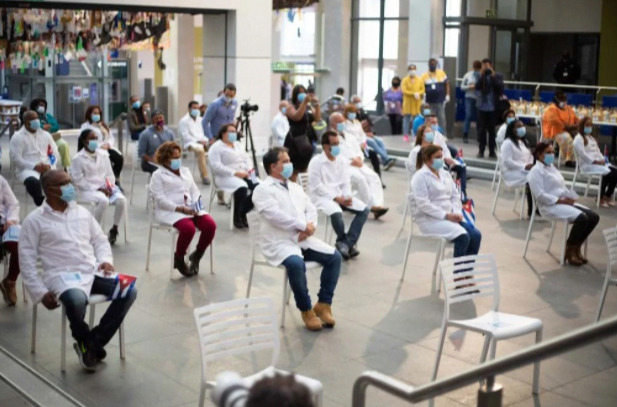 Cuban doctors during a welcoming ceremony in Western Cape, Capte Town, on May 24, 2020

In an opinion piece published by News24 online, the official said the 187-member contingent, currently deployed all across South Africa’s nine provinces, arrived armed and ready to serve and wasted no time joining thousands of their colleagues of the South African healthcare system.

Zweli Mkhize recalled how they were present through the preparation of infrastructure and offered training for medical staff.

“They were there when we rolled out mass testing in communities to stop the virus before it overwhelmed our health system. They were there as cases soared into the hundreds of thousands, and it seemed as though we would run out of staff and beds. And now, as we return to some normalcy while evading a second wave in cases, they continue to play a critical role in providing quality health services to our people, especially in areas where staff has come under immense pressure.

After providing ample data on the performance of the Cuban professionals, the health minister concluded:

“Reflecting on the past four months of working side by side with our Cuban brothers and sisters in arms, the Cuban Medical Brigade has played a significant role in our fight against Covid-19 thus far – a role which is invaluable and immeasurable.”