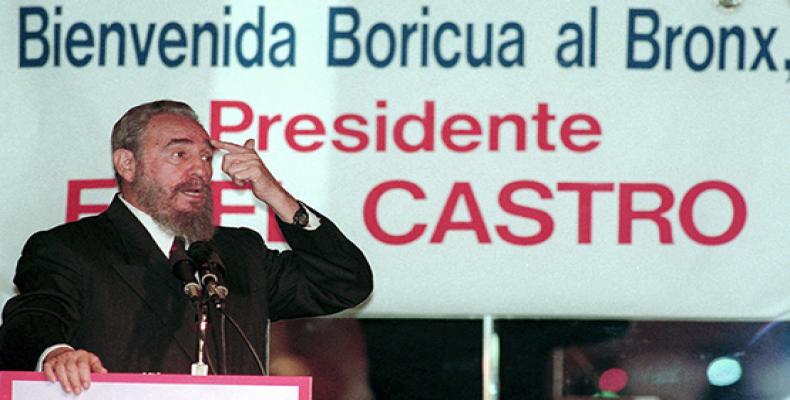 On the occasion of the first anniversary of the death of Cuba´s historic leader Fidel Castro, Cuban media has been publishing testimonies and anecdotes of people who had the chance to meet the great leader personally. RHC suggests the reading of this article published by Trabajadores, the newspaper of the Cuban Workers Federation.

How on Earth did I end up in this mess? Julio Pabon asked himself several times that weekend of October 1995. The situation had become particularly tenses months before. New York Major, Rudy Giuliani, elected in 1994 was playing with fire. The hike of bus and subway fares and of housing rents had heated things up among Latinos, and the death of young Boricua Anthony Baez as a result of police brutality was fanning the flames. What was his real sin? letting the ball go to accidentally hit a patrol car or being a son of immigrants?

In that setting, and with the intention of showing off to the media, Giuliani planned a special dinner for all dignitaries attending celebrations for the 50th anniversary of the United Nations except two: Cuban President Fidel Castro and Palestinian National Authority President Yasser Arafat.

It didn’t take long to Arab New Yorkers to react, they organized a banquet for Arafat and raised funds for the Palestinian authority; but no one said a word about Fidel.

Did you see that? They offended your friend, someone caustically told Pabon over the telephone. Aren’t you going do anything? Pabon was asked.

I saw the hands of the Cuban American National Foundation (FNCA) and Jorge Mas Canosa involved in all these events. It was not a mere coincidence that during those days they were welcome by Giuliani, and they stayed in the city to raise hell. It was the Puerto Ricans responsibility to respond, otherwise people would think that nothing really mattered to us. “Fidel is as Latino as we are, and the major not only offended him. This is another blow to our community”, I said.

I did not consider myself an activist then nor now, I was not a member of any political organization, I was more interested in the prosperity of my business that was related to sports: Pabón’s Latino Sports Ventures, Inc., but I felt that as a Latino my pride was hurt, and guided by that sentiment it occurred to me to write a press release denouncing Giuliani and defending Fidel.

Somebody told me to seek the support of the National Puerto Rican Business Council of which I was a member. I succeeded. They authorized me to speak on their behalf and they gave me 500 dollars to prepare “something”. Jimmy Rodriguez, ex- baseball big leaguer had the hottest restaurant in the Bronx, Jimmy´s Bronx Café, and he made it available to us as the venue for the event. US Congressman Jose Serrano, with whom I had worked with as advisor and media chief, joined us and added his name to those sponsoring the event.

“If you want to have dinner come to the Bronx, the salsa county, where the Puerto Rican Community will welcome you with open arms”. With this phrase we closed our press release.

“This is not going to happen, right? My frightened brother Jimmy asked. In fact, none of us thought that Fidel would read the press release, and much less that he would take our word.

“This is like winning a Nobel Prize, we will be with them”, I was told that he said and that was the beginning of a comedy of horror that, thank God, had a happy ending. By that time, it was already Saturday, October 20, and the event would take place on Monday, October 23rd. Only three days left.

The news spread quickly and people started to call me, everybody wanted to participate. I had to close the list, otherwise, the venue would have to be changed to Yankee Stadium. The final list included 400 people and the Fire Department warned me “One more person and the event is called off”.

But those who really made my life miserable was the US Secret Service. I was told to go to a meeting, and then I immediately recalled, when there is no trust, it is better to meet in a public space, like a busy restaurant in Manhattan. There were three agents.  They first tried to persuade me.

They wanted me to call the event off or to change its venue due to “security reasons”, they said. Perhaps they were right, the Bronx is the poorest borough of the five that make up New York City, and its Southern part could be especially dangerous, but this was my neighborhood, and here I felt in total control of the situation.

Then there was another request of a meeting, this time from the Cuban security. It was easier, they did not try to convince me of anything, they just asked for a copy of everything I was supposed to give to their US counterparts.

I was at a crossroads: I did not trust (nor I do today) the US Secret Service, and I did not know the Cuban secret service. What am I supposed to do? I did know that Fidel and the Cuban Revolution had enemies and perhaps I was putting their lives at risk. If anything happened I would enter history as the guy who facilitated the job to those who wanted to see him dead.

I then organized a group with my ow people from the Bronx. I called a friend who had been kickboxing champion that year, I asked him to find six black belts in martial arts, and that one had to be a woman, it did not matter if they had just been released from jail, they only had to be people we could trust. And so it was.

Despite all precautions, the day of the event I was tense. I had not even thought about meeting Fidel personally, I just wanted everything to go as planned. I would not go up on the stage, I just wanted to be sitting facing the stage, following my agents with my eyes all the time.

The Comandante would not arrive yet, but one member of the Cuban advance group called me and said “Havana, we have a problem”. Inside the restaurant they had identified one troublemaker who usually attended rallies against Cuba. She was posing as a reporter. I headed towards her and very courteously asked her to leave. She protested but she complied and she left. We would have expelled her from there any way.

Finally, I was told that Fidel was arriving. And all of a sudden, without knowing how, he was in front of me. I was surprised by his height, he was much taller than what I thought he was, and his energy, I had never experienced something like that, not even standing in front of personalities like Gore (Al) or Clinton (Bill). It was only with Fidel and boxer Mohammed Ali I experienced such a feeling.

His hands were big, warm and soft and they shook mine as my father used to do, he grabbed mine with his two hands. My dad was a wise curandero, and he told me that he who greets like that can see the other person´s soul.

Amidst all that madness, I ended up asking myself if Fidel and my father had read the same books, and questioned myself about who this man really was. None of my friends had bothered to worry about the repercussions that organizing the event would bring upon me, and it was Fidel himself who showed interest on this issue when we started to talk. Was that the tyrant everybody spoke about? I don’t think so, his verbal and body language broke prejudices and protocol.

“This is the Sierra Maestra of New York”, I said. I was surprised to have uttered those words, but I was not exaggerating. The South Bronx was our base of operations, that’s where some 100 thousand Puerto Ricans lived. Many of them came with the great migratory flow of the 1950s, almost all of them worked in agriculture, and not a few of the young generation had died fighting in the Viet Nam War, or as a results of drugs or street violence. I am a survivor.

The doors to the big hall finally opened and entered Fidel. Everybody stood up applauding. Everybody. One of those who was in the front raw wanted to touch him and one of the body guards prevented him from doing so. “Easy, we are in the Sierra Maestra”, Fidel said.

With all the haste, Julio Pabon did not have the chance to choose, he took an old copy of Fidel’s book “History Will Absolve Me” that he kept and he asked for a dedication “To my friend Julio, from one daring person to another”, Fidel wrote.

Two decades later the Boricua has told his story in a book: Knockout, Fidel Castro visits the South Bronx.  Pabon dedicated the first copy to the Comandante “To my friend Fidel, from one daring person to another”. In March this year he handed over the copy symbolically to Alex Castro, during a special presentation organized by the Puerto Rican Mission in Havana.