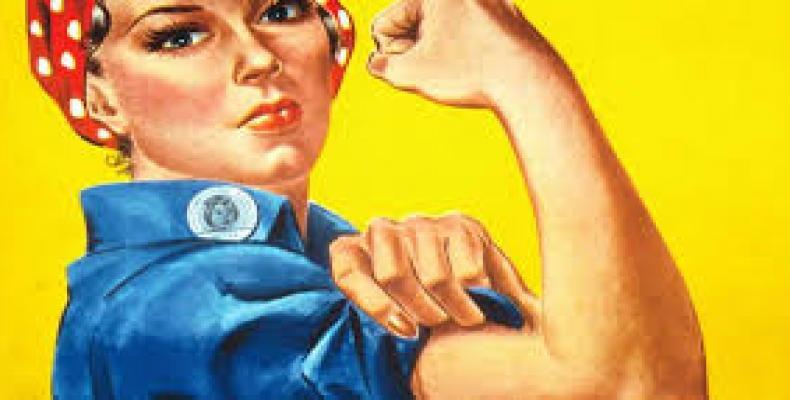 Oxfam’s new report on global inequality — which was released in January to coincide with the gathering of the ultra-wealthy at the World Economic Forum in Davos, Switzerland — lays out devastating but familiar, statistics: The world has 2,153 billionaires who collectively possess more wealth than 4.6 billion people at the bottom of the income scale.  More than half the world’s population is estimated to survive on less than $5.50 a day, while the rate of poverty reduction slowed by half since 2013.

The report demonstrates that the global economy is polarized on multiple dimensions.  Even as the gap widens between the extremely poor and ultra-rich, a chronic economic divide persists between men and women.  Millions of people subsist on an income of a few dollars a day, and billions of women work for nothing at all.

The latest analysis highlights how poverty is both gendered and also socially entrenched.  According to the report, men collectively own 50 percent more wealth than women do, and at the top of that wealth gap, “the richest 22 men in the world own more wealth than all the women in Africa.”

The gender wealth gap isn’t entirely surprising — sexism predates industrial capitalism, after all.  But the systematic economic subjugation of women reflects how patriarchy and poverty are mutually reinforcing. Due to social as well as cultural pressure, women perform vast amounts of unpaid labor — about 12.5 billion hours every day.

Women’s unwaged labor — which occupies up to 14 hours a day in rural and low-income regions — involves domestic duties, primarily the “care work” of looking after children or elders, cooking, cleaning and mending. It could also involve procuring water or gathering firewood, or tending subsistence crops on a family farm — tasks that will become increasingly challenging as climate change and other environmental stresses intensify.

One woman in rural India, who said she worked around the clock and would be beaten by her husband if she slipped up, told Oxfam researchers, “I have no time, not even time to die for they will all curse…. Who will look after them and bring money to the family when I’m gone?”

If women like her were paid the real value of their economic contributions to their families, they would be owed at least $10.8 trillion (more than half of the U.S. annual gross domestic product) — the estimated collective value of women’s unpaid care work worldwide.

“The care economy is very neglected,” said Gawain Kripke, director of policy and research at Oxfam America. “Most of it is unpaid. And what we pay [for] is treated very poorly. And this provides a subsidy to the more formal economy. All this work that gets done, society and the economy wouldn’t function without this work…. Businesses rely on it, families rely on it, society as a whole relies on it. And yet we don’t recognize it, and don’t compensate it, and don’t support it.”

This is not an accidental oversight, but institutionalized oppression. “This is what patriarchy is,” he added. “It ignores and makes invisible women, and exalts and elevates rich men.”

In the United States, the care gap for children and the elderly falls disproportionately on women, whether they are caring for their own, or paid as hired care workers. In 2018, according to the Alzheimer’s Association, about 16.2 million people, the majority of them women, provided unpaid informal care for individuals with dementia, contributing about 18.5 billion hours of feeding, bathing, providing medication and other tasks. If the unpaid care work in the U.S. was provided through government services instead, taxpayers would have paid an estimated $234 billion. Meanwhile, professional home health care aides who care for seniors — aides who are also mostly women — typically earn poverty wages, and about half receive public benefits.

Child care faces a similar crisis: it’s both extremely expensive for families — well over $1,000 per month in many areas — and chronically underpaid for child care providers. Across the country, the Center for American Progress reports that roughly half of families with children under the age of six (about 6.3 million households) face difficulty finding suitable child care, often because of cost barriers or a lack of open slots. Roughly 4 in 10 mothers (and an even higher percentage of Black and Latinx women) are especially vulnerable because they are the primary or sole income-earners for their families. Women who could not find a decent child care program were generally less likely to be employed (fathers’ workforce participation, unsurprisingly, did not change according to child care availability), indicating that many women opt out of work rather than have their earnings eaten up by daycare fees.

Institute for Women’s Policy Research (IWPR) Chief Operating Officer Cynthia Hess says that, since women tend to earn lower wages, “it often makes economic sense for the family for the woman to be the one to do that…. And without access to that affordable quality child care, a lot of working parents, particularly mothers, really don’t have a real choice about whether to participate in the paid labor force or not.”

According to Wendy Chun-Hoon, executive director of advocacy group Family Values @ Work, the marginalization of care work can drag down women’s lifetime economic prospects. “Devaluing women means care work is under-valued and unseen. That leads to lower pay and to job loss, which then cements women in jobs that pay less and have less opportunity for advancement, or boots women out of the workforce and labels them as ‘unreliable’ and ‘dependent’,” Chun-Hoon told Truthout via email.

Despite steady growth in women’s workforce participation over the past 50 years, the care gap between working men and women has barely budged. According to the Pew Research Center’s time-survey analysis from 1965 to 2011, “American mothers still spend about twice as much time with their children as fathers” — with women most recently clocking around 13.5 hours a week, compared to men’s 7.3 hours. According to a briefing paper co-authored by Oxfam America and IWPR, the care gap is wider among young people than older ones: Women aged 25 to 34 spend about twice as much time on unpaid household and care work (8 hours to 3.9 hours) than their male peers, compared to a gap of 5.6 hours per week versus 4.1 hours per week between women and men aged 45 to 54. The care gap is also wider between Black, Latinx and Asian men and women than between white ones.

The gender gap in wealth is undergirded by a gender gap in political power. The inequality report points out that fewer than one in four government ministers around the world is a woman, which might explain why the social welfare policies most crucial to women and families are often targeted by austerity measures. “Cutting these services is done as a budget savings,” Kripke said, “but they don’t see that the costs will be borne mainly by women, and many women will have to leave the paid workforce in order to pick up the care burdens.”

Although the intersection of gender and economic inequality is built into most modern social structures today, Oxfam and IWPR researchers note that both gender and economic justice can be tackled in tandem through the structural redistribution of wealth.  For the U.S., gender-equality advocates recommend measures like paid family leave and paid sick days to allow working parents to meet their care needs without endangering their jobs. The gender wage gap, which hovers at roughly 19 percent between women’s and men’s weekly earnings, could be narrowed by boosting wages and working conditions and supporting collective bargaining.  To help counter gender stereotypes, paid family leave policies should be structured to encourage men to use their leave time to spend more time caring for their kids.

In the U.S., child care has become a central issue for both liberal and conservative lawmakers. Democratic presidential contenders Elizabeth Warren and Bernie Sanders have advocated for universal early childhood education funded through a wealth tax.  Warren has proposed making child care free for households earning less than double the federal poverty line and cap overall costs at 7 percent of income; Sanders has not released a detailed plan, but has called for universal preschool, in line with legislation he previously sponsored. Sanders also commented broadly on the Oxfam report, stating that the global wealth gap had pointed to the need to “develop an international movement that takes on the greed of the billionaire class.”

In response to the Oxfam report, Mary Ignatius, statewide organizer of the California-based advocacy group Parent Voices, stated, “Fully funding a robust and comprehensive child care system that meets the needs of today’s working women will dramatically and immediately close the income inequality crisis in this country and liberate women to take greater control of their lives.”

At the same time, a robust national family care program would engage women both as beneficiaries and workers. Although care jobs are hugely in demand, they remain notoriously low-paying and underregulated.  A sustainable care infrastructure — expanding on the model family welfare policies of Scandinavian countries — would guarantee living wage jobs in gender-segregated sectors of the economy — particularly child care and home care jobs that relegate millions of women to the lowest wage tiers of the education and health care systems. An analysis by the University of California-Berkeley’s Center for the Study of Child Care Employment shows that aligning preschool teachers’ salaries with those of typical elementary and middle school teachers would more than double their pay, from $25,218 to $60,602 annually, which, multiplied by the early childhood education workforce nationwide, would boost their collective earnings by more than $80 billion.  Similarly, the home health care workforce, with annual median wages stuck at just $13,000, would be massively boosted by raising the minimum wage to $15 per hour, which would in turn raise their income by roughly 50 percent, and generate an economic ripple effect that would average $2,000 per worker.

The Oxfam report estimates that taxing just an additional half of 1 percent of the wealth of the richest people in the U.S. would, over a decade, generate the funds “needed to create 117 million care jobs in education, health and elderly care and other sectors, and to close care deficits.” Those jobs could form the foundation of a comprehensive care-labor infrastructure, providing working parents with universal access to child, elder and disability care, as well as the flexibility to take time off from work to tend to an ailing parent or bond with a newborn, without risking their families’ economic security.

Global inequality, of course, is not just a gender issue.  But the current inequities in wealth around the world could not exist if patriarchy were not subordinating half the population to a hierarchy within a hierarchy.  And to end inequality, a political transformation that dismantles sexism as a tool of economic oppression is a critical step toward total social emancipation.