COVID-19: Cuba wages a war for which it is well prepared 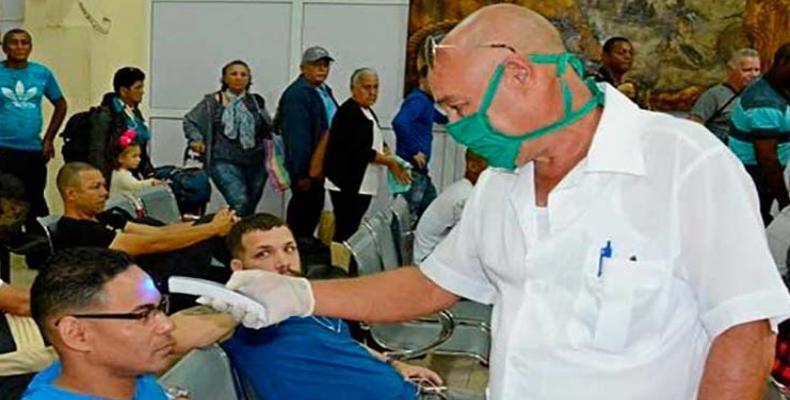 Covid-19: Cuba wages a war for which it is well prepared

Cuban President Miguel Díaz-Canel declared on Cuban television on Friday, March 20, that Cuba is prepared to wage a successful battle against the Covid-19 infirmity. “We have [he said] an educated, informed, responsible, compassionate, and disciplined people. We have in our favor a system of public health for all, an acclaimed scientific community, an effective system of Civil Defense, a Party and a government that place the Cuban people at the center of their attention; and we also have the army of the people. In addition to these strengths, we have the training of more than 60 years of a long journey of resistance in the tough wars of all kinds that they have imposed on us. . . . Be strong, Cuba, we will live and we will overcome!”

As of Sunday, March 22, Cuba has 35 confirmed cases of the infirmity Covid-19, caused by the new coronavirus SARS Cov-2. Of those thirty-five, fifteen are travelers and visitors from other nations; and twenty are Cubans. Of the twenty Cubans, fourteen were infected during international travel; five had direct contract with a foreign tourist or a Cuban who had traveled internationally; and one is a Cuban worker in the tourist industry who likely was infected while working with a group of Italian tourists. Therefore, as of March 22, all of the confirmed cases are imported; there has not yet been a case of autochthonous transmission among Cubans who have not had direct or indirect contact with the exterior. On Monday, March 23, five new cases are reported, bringing the total of confirmed cases to forty; the five new cases also are imported.

The March 21 issue of the Cuban daily newspaper Granma included a twelve-page supplement that was devoted to the pandemic, six pages of which were dedicated to a thorough description of the government’s report on the adoption of new measures on Friday, March 20, in a special two-hour edition of the evening new program Mesa Redonda. During the program, a report was presented by a government team formed from the Council of Ministers, led by President Miguel Díaz-Canel, Prime Minister Manuel Marrero Cruz, Deputy Prime Minister Roberto Morales Ojeda, and Minister of Public Health José Angel Portal Miranda; and including the ministers of Internal Commerce, Finances and Prices, and Work and Social Security as well as the Vice-President of the Central Bank of Cuba.

The Cuban Plan of Prevention and Control of Covid-19 was approved on March 5, prior to any confirmed cases of Covid-19. It is a dynamic plan, based on a daily evaluation, with modifications and new measures as the international and national situation evolves, such as the new border restriction of March 20.

The Plan has been conceived as having three phases. The first or pre-epidemic phase is characterized by confirmed cases of travelers proceeding from affected countries or local cases produced by contact with these travelers. At the moment, Cuba is still in the first phase. The second phase is that of limited autochthonous transmission, where there are confirmed cases in which direct links with travelers proceeding from affected areas has not been established, but such cases are limited to a locality of the country or a particular center or institution. The third is the epidemic stage, where cases are confirmed without links to travelers, and there are an increasing number of cases in different localities of the national territory.

The Plan of Prevention and Control has various components. An important dimension is a program of vigilance or surveillance, seeking to identify persons with symptoms. The surveillance occurs at points of entry in the country, where cameras that read body temperatures of travelers have been in place for some time as part of Cuba’s regular epidemiological vigilance. In addition, vigilance is in place in all places of work or study, where people with respiratory symptoms are prohibited from entering and are sent to the family doctor. Moreover, there is a program of active inquiry to identify persons with symptoms, incorporating more than 28,000 medical students, who go from door to door inquiring if a person in the house has respiratory symptoms. The students are under the supervision of a professor, who gives priority to ensuring the personal protection of the youth. The students wear masks, and they do not conduct physical exams or have personal contact, and they maintain social distance. Their task is to identify persons with symptoms.

When persons with respiratory symptoms are identified, they are sent to the family doctor’s office in the area, who determines if the symptoms warrant clinical analysis. If so, they are taken to a local hospital for testing. Samples are taken at the local hospital and sent to one of three laboratories in the country, where the cases are confirmed as Covid-19 or not. Through a testing kit designed by Cuban researchers, these laboratories have the capacity to identify not only Covid-19, but also seventeen other types of viruses. So far, most of the patients have been determined to have a virus other than Covid-19.

All persons with respiratory symptoms combined with having traveled internationally or having had contact with an international traveler are hospitalized for up to fifteen days, where they are regularly tested. If confirmed for Covid-19, they remain hospitalized for treatment. Cuba has at its disposal the Cuban drug Interferon Alfa 2B, which has been developed by Cuban Center of Genetic Engineering and Biotechnology, and which has been used to treat with success Covid-19 cases in China. Several countries have requested Cuba for the drug, requests that are under consideration. Cuba has supplies of the drug to respond to national need and international requests.

Two categories of persons are placed in obligatory fifteen-day home quarantine, namely, persons with respiratory symptoms but who have not had contact with international travelers; and persons who have traveled internationally but who do not have symptoms. They are tested regularly during the quarantine, and confirmed cases are hospitalized for treatment.

In addition to restrictions at the border, vigilance, testing, hospitalization, and quarantine of particular persons, the Cuban plan has other dimensions as well. The sale of a chlorine solution has been expanded, with the establishment of 444 points of distribution throughout the country, with plans to increase the number of distribution points, in order to avoid the concentration of persons. All places of work and study are mandated to provide solutions for hand-washing in multiple and convenient places.

Moreover, the plan calls upon weekend food markets to change their structure of distribution, reducing centralized distribution and using mobile street sellers with carts. And it calls for a decentralization of the locations of small-scale merchants authorized to sell goods and provide services, which tend to concentrate in particular areas.

Restaurants and cafeterias are obligated to reduce their services by 50%, and arrange the tables with a distance of two meters among them.

There are 151 workshops that are dedicated to the fabrication of masks, which are being made for distribution to the population, above all people with respiratory symptoms and workers who have transactions with large numbers of people. People can bring their own cloth to a workshop for elaboration for their personal use.

Cuban citizens are being called upon to suspend tourist hotel lodging as well as any activity than involves concentration of persons, such as night centers, cinemas, theatres, et cetera. Social distancing in greeting and in personal transactions as well as voluntary quarantine and isolation are recommended. Working at home via Internet is encouraged.

The plan is well conceived. It is carefully formulated; it has not been formulated under pressure, nor is it improvised. It has been formulated by the government, and it is supported by the institutions of the nation: The Party, the medical profession and medical institutions, the media, and the mass organizations. All are calling the people to calm and to serenity, yet to appreciate the seriousness of the situation. The people are called to avoid panic and to comply with the Plan.

In Cuba, the people have confidence in the leadership and in the authorities of the nation. Therefore, they are inclined to support and comply with the measures adopted by the government. The people are not panicking, nor are they divided.

Cuba has all the necessary technical and human resources to respond to the threat, a situation that is rooted in sixty years of giving emphasis to the building of a society that responds to human needs; and that has established a government of, by, and for the people.