The possible and necessary road for the US Left 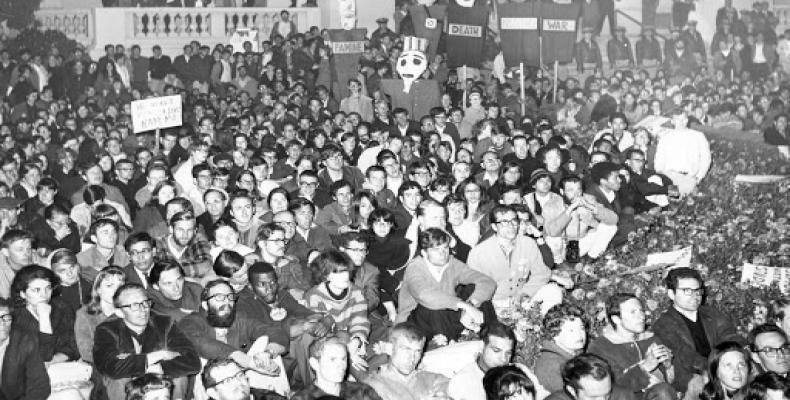 The possible and necessary road for the US Left

We need first to understand that the United States of America is not a democratic society. It is a political-economic-ideological system with a democratic façade, but not a democratic substance. It has been so since its proclamation in 1776 and its constitutional founding in 1787. Its mechanisms for the control of the political system and the nation’s ideology by an economic elite have evolved over these more than two centuries. At present, the principal mechanisms are the need for politicians to raise large sums of money to finance their political campaigns, the ownership of the media by large corporations, and the framing of public debate by elite financed think tanks. The various defects of the political process, including its tendency toward conflict and gridlock, the superficiality of public debate, and the divisions and confusions of the people, are consequences of these structures.

Next, we need to study modern human history, with humility. Other peoples in the past have confronted a situation in which the nation was controlled by an elite or their political representatives, which had abused the political, civil, social, and economic rights of the majority; in several situations, there emerged a small group of people, led by an exceptional leader, that guided the people in the taking of political power from the abusive elite. This occurred in Russia in 1917, Vietnam in 1945, China in 1949, Cuba in 1959, Chile in 1970, Nicaragua in 1979, Venezuela in 1999, Bolivia in 2006, and Ecuador in 2007.

Then, we have to ask, how did they accomplish the taking of power? Their methods and means were various, but they had certain components in common. First, their explicit goal was the taking of political power from the abusive elite. In order to accomplish this goal, they needed the support of the majority of the people; therefore, they were constantly speaking to the people. They formulated alternative narratives on the nation. They articulated a comprehensive plan of action or platform, announcing a variety of steps that they were going to carry out when they arrived to power. Their manifestos and platforms were effective in mobilizing the support of the majority. They understood the sources of the concerns of the people, and they never castigated them for their ideological backwardness, understanding that this was a consequence of decades and more of abuse.

In the case of the United States today, an alternative narrative has to include an understanding of modern human history. It needs to explain the role of conquest, colonialism and slavery and other forms of forced labor in promoting the economic development of Western Europe and the United States. It ought to explain the emergence of movements among the colonized throughout the world, giving rise to a transition to neocolonialism, involving unequal exchange and the superexploitation of labor in the context of new political norms. The narrative needs to explain the alternative posture toward the neocolonial world powers of China, Cuba, Venezuela, Nicaragua, and Vietnam, as a consequence of the continuation in political power of popular revolutions in those nations.

With respect to the history of the United States, the alternative narrative has to explain the factors that gave rise to the spectacular economic ascent of the United States from 1789 to 1965, including the specific connections of the U.S. economy to the unfolding global process of conquest, colonialism, slavery, neocolonialism, and imperialism. It ought to analyze and identify with the popular movements in the United States formed by artisans, farmers, workers, blacks, women, students, Native Americans, Puerto Ricans, and Mexican Americans from 1774 to 1972, all of which sought to make real the promise of democracy formulated at the founding of the nation; with special emphasis on the African-American Movement from 1930 to 1972, which lifted up exceptional leaders, such as Malcolm X and Dr. Martin Luther King, Jr., whose projections for the future of the nation were theoretically advanced and remain vibrant today.

The alternative narrative has to make clear that the established world order is not sustainable. The modern world-system has expanded economically on the basis of the conquest of new lands and peoples, and since the middle of the twentieth century, it has reached and overextended the geographical and ecological limits of the earth. All the world knows that human production threatens the ecological balance of the earth, as has been explained by the ecology movement since the 1960s.

Nor can the United States maintain its position of dominance. The fall of a dominant power relative to other powers is a normal tendency, as occurred with the previous dominant powers of the world-system, the Dutch and the British.

The alternative narrative has to be accompanied by a platform, a comprehensive plan of action. The foundation of the plan has to be the proposal for a strong state that acts to protect the political, civil, social, and economic rights of all the people, debunking the myth of the free market. The platform needs to make specific proposals with respect to the concerns of the people.

The platform has to be articulated with political intelligence. The goal is to persuade as many of the people as possible to commit themselves to the popular revolution. The platform and the discourse have to reach out to all sectors of the people, beyond the social base of the revolution, not by modifying positions, which gives the impression of insincerity; but by continually reflecting on the creation of more effective ways of communication, knowing that the proposals defend the objective interests of the great majority. Idealism, the making proposals that are not possible in the context of existing conditions, has to be avoided, as do exaggerations.

We have to think of the long term. We have to focus on the development of a political party or organization that has a permanent presence and is able to begin the necessary process of leading the people to popular revolution.

In the late 1960s, we were well positioned. We had hundreds of thousands of people in the streets, demanding an end to the Vietnam War, in a process that would culminate in the second great defeat of U.S. imperialism, after the Bay of Pigs. We had the political establishment on the ropes, their legitimacy questioned from all quarters. We should have been able to advance the movement from that point, through popular education and the building of mass organizations. But we failed to do so. We engaged in excesses of all kinds, and we lost credibility among our people.

The US Left has never recognized its historic error of failing to teach the people the necessary road. But it is not too late. The task is not insurmountable. We have truth and universal moral values on our side. We should be able to discredit and delegitimate the pretenders to leadership of our nation, demonstrating their profound historical ignorance and moral decadence. Let us return to that necessary task that we should have attended more systematically beginning five decades ago, leading our people toward that possible just and sustainable world that the peoples who form our humanity rightly demand.