Deepening relations between Cuba and Russia 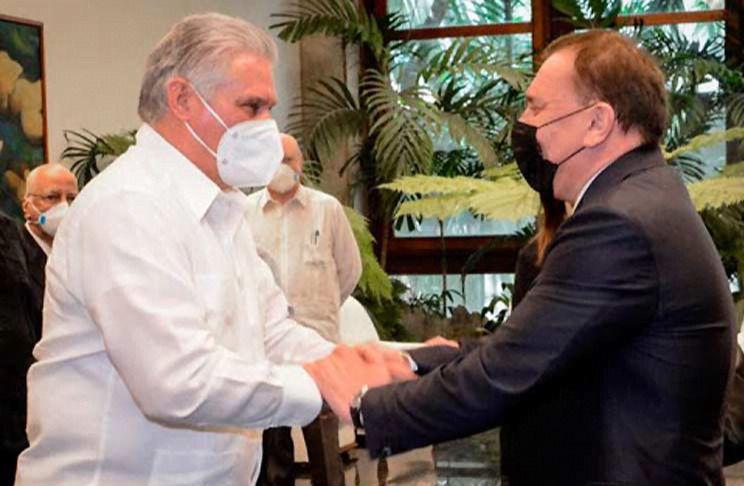 Cuba and Russia reviewed in Havana the state of their economic, trade, financial and cooperation ties, which both sides describe as fruitful, excellent and strategic.

There are many prospects for expanding and diversifying these ties, according to the meetings between Cuban government officials and Russian Deputy Prime Minister Yuri Borisov.

Both Havana and Moscow have reiterated on numerous occasions their interest in continuing to deepen a long-standing relationship, based on mutual respect, coincidence of criteria in various aspects and solidarity.

The presidents of Cuba, Miguel Díaz Canel, and Russia, Vladimir Putin, maintain a fluid and close telephone contact to analyze issues of interest to the two peoples and that are of benefit to them.

Borisov's visit, as Putin's special envoy, gives a boost to those ties, which the Russian deputy prime minister described as extremely important for the Eurasian nation, which is among the first trade partners of the Caribbean country.

Earlier this year, the deputy prime minister had already traveled to the archipelago to attend the 18th session of the Russian-Cuban Intergovernmental Commission, which followed up on bilateral collaboration and highlighted the existing potentialities.

Transportation, biotechnology, energy and education are some of the sectors in which projects have been launched between the two states.

Last year, a scientific agreement was also signed that made it possible to increase links between universities and research centers, as well as the development of studies in key areas such as the environment, biophysics and biotechnology.

Since 2020, the Biotechnology and Pharmaceutical Group of Cuba has a representation in Moscow. Agreements have already been signed with Russian institutions to develop Cuban biotechnology products, recognized worldwide.

There are also plans to create a scientific and practical center on Russian soil to train highly qualified Cuban specialists in the pharmaceutical field.

COVID 19 has not prevented Havana and Moscow from continuing to seek new areas for cooperation and to strengthen their friendly relations. In fact, Russia once again demonstrated that it is a great friend of Cuba in these difficult times of pandemic and the tightening of the U.S. blockade.

For the Cuban people, the Eurasian country sent some 200 tons of aid, including food and medical supplies. Likewise, in view of the shortage of oxygen experienced by the country due to the breakage of its factory, the Russian authorities donated 20 medical gas concentrator plants, necessary for those infected with COVID 19.

Cuba and Russia maintain historical relations of cooperation and friendship. There is a mutual and respectful understanding that translates into the search for new ways for cooperation between both peoples and the raising of their standard of living.