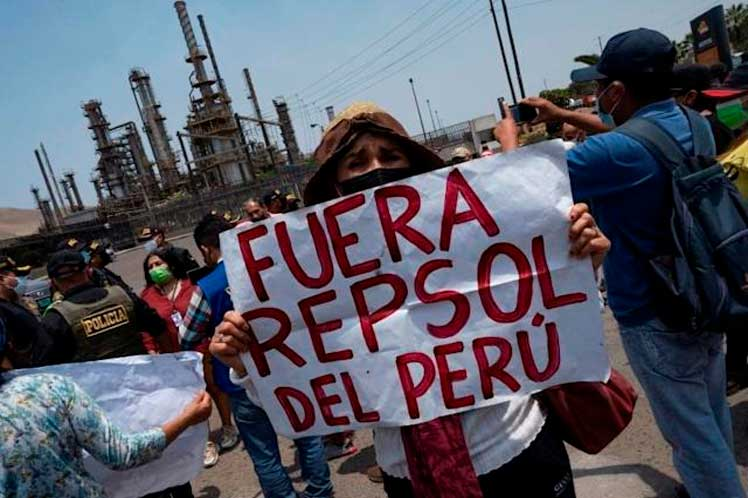 Repsol -- GET OUT OF PERU

In January of this year, Peru registered the worst environmental disaster in recent times. Nearly 12 thousand barrels of oil were spilled by the Spanish company Repsol on the Peruvian coast, causing serious damage to biodiversity and leaving thousands of people without work.

The unfortunate event took place when the Italian-flagged tanker "Mare Doricum" was unloading crude oil at the La Pampilla refinery, owned by Repsol in Ventanilla, 30 kilometers north of Lima.

The oil slick spread out to sea up to 140 kilometers north of the refinery, causing the death of a large number of fish, birds and marine mammals. Fishing and tourism activities in the area were also affected.

In the last few days, the Peruvian Environmental Evaluation and Control Agency reported the imposition of a fine of more than 10 million dollars on the Spanish oil company for providing false information and failing to act accordingly after the spill.

The truth is that at first Repsol did not admit the large amount of oil spilled, and provided figures that were much lower than the reality.

In addition, in an attempt to evade responsibility, it blamed the event on various causes, such as a strong swell caused by a tsunami resulting from the volcanic eruption in Tonga. Witnesses and the ship's captain denied that version.

Later, the captain was blamed for a bad maneuver that supposedly caused the ship to collide with the underwater crude distribution system, which the investigation opened as a result of the event showed that it had not received the required maintenance, which caused the spill.

Repsol is one of the many multinationals that cause damage to the environment and to the health of the inhabitants of the areas where they operate, and try to evade their responsibility.

There are many examples of this. One of the best known in recent times is that of the U.S. oil company Chevron-Texaco in Ecuador, where it operated from 1964 to 1992 in the Ecuadorian Amazon.

Not only was an ecocide committed, but the contamination of rivers and groundwater by the dumping of oil and toxic substances has led to cancer being one of the diseases that most affects the inhabitants of the region.

Repsol, like the rest of the multinationals responsible for environmental degradation, has the obligation to respect the right to a healthy and safe environment and not affect the health of the inhabitants of the places where they develop their activities. This is something that the Spanish company has not complied with, since, according to specialists, it has been accused of numerous environmental infractions in Peruvian territory.