Miguel Díaz-Canel: Cuba will always be a meeting place for those who defend and promote just causes anywhere in the world 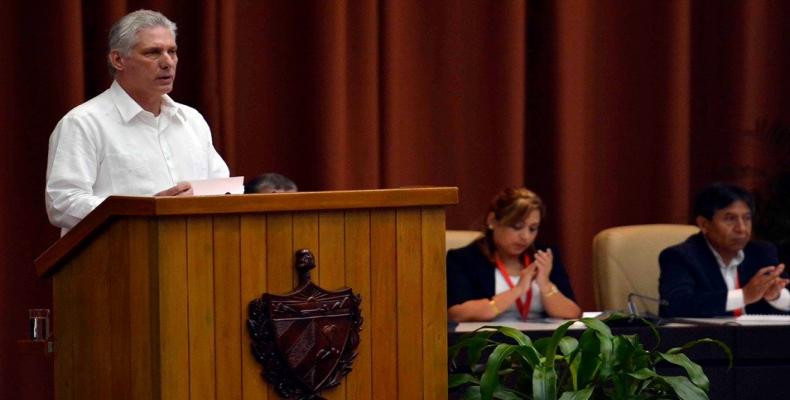 Neoliberalism is an economic failure and a social disaster, said Cuban president Miguel Díaz-Canel, while delivering the closing speech Sunday at the Anti-imperialist Meeting of Solidarity for Democracy and against Neoliberalism here in Havana.

Diaz-Canel reiterated that Cuba will always be a meeting place for those who defend and promote just causes anywhere in the world.

He recalled that lies have long been the main weapon of imperialism to hamper the advance of social movements and progressive forces of the left. He pointed to the fierce slanderous campaign in the mainstream media to try to discredit Cuba’s health cooperation with other nations and peoples of the world. The Cuban leader stressed that Cuba is a clear example of how much peoples driven by friendship, solidarity and cooperation can accomplish together.

“By way of huge sacrifices, firm resistance and also thanks to world solidarity, our people have managed to defend our Revolution all these years against all sorts of US aggression. The strength of our revolutionary process lies primarily on the firm support and the determination of our people and their active participation in decision-making at all levels.”

The Cuban head of state thanked the nearly 1300 delegates from 95 countries, who participated in the Havana Anti-imperialist Meeting of Solidarity for Democracy and against Neoliberalism. The event’s final declaration expresses their unwavering support for Cuba and the Cuban people’s cause against Washington’s nearly six decade-old blockade of the neighboring Caribbean state.

“On behalf of Cuba and our people, I would like to assure you all that this new generation of Cuban leaders, many of us were born and raised by the generation of Raúl and Fidel Castro, who made the Revolution. Let me assure you that we are the continuators of the socialist revolutionary work that they started, as true followers of Fidel and Martí. I can assure you that we will not yield one inch in our position to defend our nation’s sovereignty, independence and social justice. We will not give up any of our principles, including the solidarity principle to which our people and our Revolution owe so much.

“We will continue our fight against the US blockade in every field and at all forums, but specially here in Cuba as our people strive for development. Our people are Cuba’s precious resource. We Cubans are creative, imaginative, brave, heroic, unstoppable. We have managed to defend and improve our Revolution even under the most difficult circumstances and against all sorts of aggression.”

At the Anti-imperialist Meeting of Solidarity for Democracy and against Neoliberalism, delegates renewed their commitment to the truth, as well as their solidarity with and support for just causes anywhere in the world.

As president Diaz-Canel said at the closing of the Havana meeting, the people’s just causes anywhere in the world is our cause as well. And he stressed: ‘a better world is possible, necessary and urgent. Let’s fight for it.’