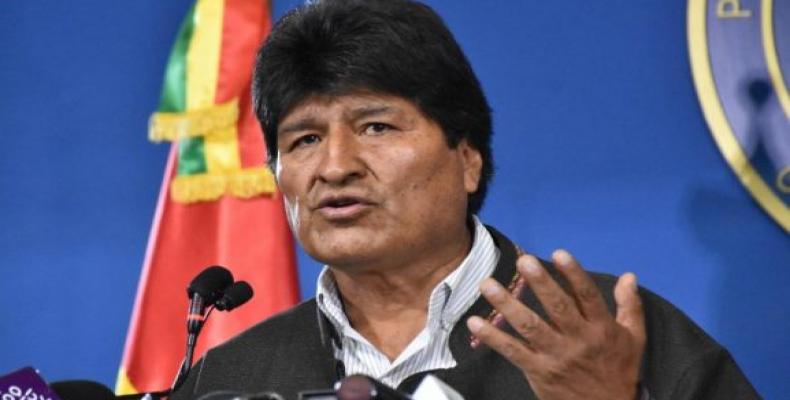 The Bolivian tragedy eloquently teaches several lessons that our peoples and popular social and political forces must learn and engrave in their consciences forever.

Here is a brief enumeration, as we go along, and as a prelude to more detailed treatment in the future.

First, no matter how exemplarily the economy is administered as Evo's government did, growth, redistribution, flow of investments are guaranteed, and all the macro and microeconomic indicators are improved, the right and imperialism will never accept a government that does not serve their interests.

Second, we must study the manuals published by various U.S. agencies and their spokespersons disguised as academics or journalists to be able to perceive in time the signs of the offensive.

These writings invariably highlight the need to shatter the reputation of the popular leader, what in the jargon is called character assassination, calling him a thief, corrupt, dictator or ignorant.

This is the task entrusted to social communicators, self-proclaimed "independent journalists", who in favor of their quasi-monopoly control of the media drill the brains of the population with such defamations, accompanied, in this case, by hate messages directed against native peoples and the poor in general.

Thirdly, once the above is accomplished, it is the turn of the political leadership and the economic elites to demand "a change", to put an end to the "dictatorship" of Evo who, as the impresentable Vargas Llosa wrote a few days ago, is a "demagogue who wants to remain in power".

I suppose he will be toasting with champagne in Madrid when he sees the images of the fascist hordes looting, burning, chaining journalists to a post, shaving a woman mayor and painting her red and destroying the minutes of the last election to fulfill Don Mario's mandate and free Bolivia from an evil demagogue.

I mention his case because he has been and is the immoral standard-bearer of this vile attack, of this unlimited felony that crucifies popular leaders, destroys a democracy and installs the reign of terror by gangs of hired assassins to scorn a worthy people who had the audacity to want to be free.

Fourth, the "security forces" enter the scene. In this case we are talking about institutions controlled by numerous agencies, military and civilian, of the government of the United States. They train them, arm them, do joint exercises and educate them politically. I had the opportunity to prove it when, at Evo's invitation, I inaugurated a course on "Anti-imperialism" for senior officers of the three weapons.

At that time I was shocked by the degree of penetration of the most reactionary American slogans inherited from the Cold War era and by the undisguised irritation caused by the fact that an Indian was president of his country.

What those "security forces" did was to withdraw from the scene and leave the field free for the uncontrolled actions of fascist hordes -such as those who acted in Ukraine, Libya, Iraq, Syria to overthrow, or try to do so in the latter case, leaders who were annoying to the empire- and thereby intimidate the population, the militancy and the very figures of the government.

In other words, a new socio-political figure: military coup d'état "by omission", allowing reactionary gangs, recruited and financed by the right, to impose their law. Once terror reigned and in the face of the government's helplessness, the outcome was inevitable.

Fifth, security and public order should never have been entrusted in Bolivia to institutions such as the police and the army, colonized by imperialism and its lackeys of the indigenous right. When the offensive was launched against Evo, a policy of appeasement and not responding to the provocations of the fascists was chosen. This served to embolden them and increase the bet: first, to demand a ballot; then, fraud and new elections; then, elections but without Evo (as in Brazil, without Lula); later, Evo's resignation; finally, before his reluctance to accept blackmail, to sow terror with the complicity of police and military and force Evo to resign. From manual, all from manual. Will we learn these lessons?