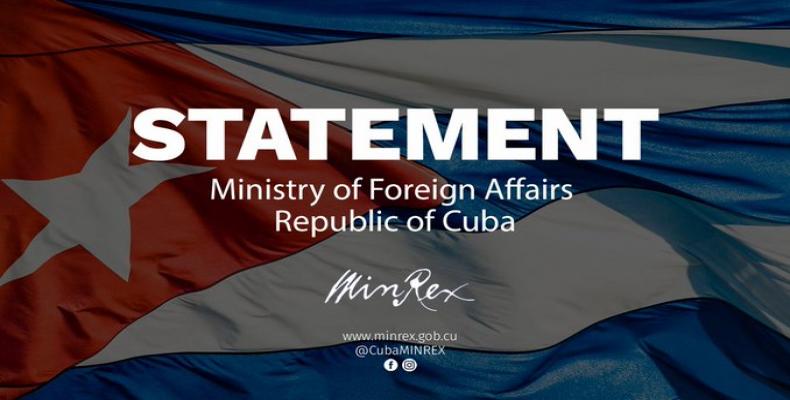 Statement by the Ministry of Foreign Affairs

The Ministry of Foreign Affairs of the Plurinational State of Bolivia made public the decision of the coup government to suspend diplomatic relations with the Republic of Cuba, alleging that the Cuban government has systematically affected bilateral relations and has been hostile towards Bolivian authorities.

The Ministry of Foreign Affairs of Cuba categorically rejects the unfounded accusations of the de facto Bolivian government.

Since its violent takeover on November 12, 2019, members of the de facto government of that country have taken systematic actions to deteriorate and hinder bilateral relations with Cuba.  The acting authorities deployed a ferocious campaign of lies and distortions against Cuba, particularly against Cuban medical cooperation, which publicly incited violence against our health personnel and included brutal, illegal and unjustified searches and raids, false accusations and arrests of Cuban collaborators.

As early as November 14, 2019, they asked Cuba to withdraw our ambassador, who returned definitively and honorably to Havana on December 7, after having impeccably guaranteed and executed the safe return of the last of these, with significant risks for the diplomatic personnel who organized and accompanied the movements of the collaborators through dangerous areas.  Between November 15 and 20, unilaterally, the acting Foreign Ministry withdrew all Bolivian diplomatic personnel accredited in Cuba.

On the same day, the so-called Minister of Communications issued slanderous statements against Cuban diplomatic personnel and their families, which included offenses against the Cuban ambassador and the accusation that his wife organized demonstrations and resistance to the coup, when she has never even visited that country.

As part of this campaign, on November 15, 2019, the Clinica del Colaborador, owned by the Republic of Cuba in La Paz, was violently raided by police authorities, without a warrant.  As a result, equipment, materials and other items were stolen from that facility and to this day, the personnel of the Cuban Embassy have been prevented from accessing this property of the Cuban State.

In a ridiculous denunciation, on November 18, of an alleged plan to attack the coup authorities in Beni, the participation of non-existent Cuban citizens was included to fuel hysteria.

On January 8, 2020, the designated Minister of Health accused our collaborators of not being health professionals and of carrying out indoctrination work.  He was accompanied at that conference by Bolivian Police Colonel Gonzalo Medinacelli, at the service of the U.S. Embassy in La Paz and the main instigator and protagonist of the incidents against our collaborators.

The Presidential Message to the Nation of the Plurinational State of Bolivia, last January 22, referred offensively to the "false Cuban doctors" -- ignoring the altruistic and professional work of our health personnel.  In a slanderous way, this message states that 80 percent of the funds of the Cuban Medical Brigade in Bolivia were transferred to our country "to finance the Castro-communism that has subjugated and enslaved its people.

As the Cuban Ministry of Foreign Affairs timely denounced in its statement of December 5, 2019, the so-called Minister of Health "shamelessly exaggerates the amount of the stipends of Cuban medical specialists, which are actually lower than those of Bolivian general practitioners; and hides the fact that Cuba did not receive one cent of benefit from this cooperation".  The money earned by the Cuban medical brigade in Bolivia was never transferred to Cuba and was used to cover the expenses of the collaborators in that country.  The budget of the Cuban Medical Brigade was approved in accordance with Bolivian procedures for its allocation, including the corresponding parliamentary procedures, and was duly audited by the Bolivian Ministry of Health and other authorities.

We are not in the habit of disclosing what medical cooperation with countries costs us because our people, despite the blockade and economic difficulties, assume it with generosity and altruism as a duty to be fulfilled with modesty.

But the insults against Cuba force us to reveal that medical cooperation with Bolivia began in 1985 with the donation of three intensive care units for pediatric hospitals.  From 2006 to 2012, Cuba assumed all the expenses of the cooperation with Bolivia for more than two hundred million dollars a year, which included medical equipment, medicines, supplies and expendable material, sustainability of the Cuban brigade, air transportation of the collaborators and expenses for medical equipment.  Since that date, taking into account the favorable situation of the Bolivian economy, this country assumed the costs of providing medical services but never transferred a dollar to Cuba nor did it receive any income.  At the same time, 5,184 young Bolivians graduated from medical school in our territory, totally at the expense of Cuba.

None of the de facto authorities have recognized that, as a result of the dedication and professional and strictly humanitarian conduct of the Cuban health workers, 54% of whom were women, 77,330,447 consultations were offered in that sister country, 1,529,301 surgeries were carried out, 60,640 births were attended, 22,221 vaccinations were given and 508,403 ophthalmological surgeries were performed, services that the Bolivian people have been deprived of since the departure of our health workers.

On January 22, the designated Minister of Hydrocarbons, declared that Bolivia was breaking a commercial contract to sell urea to a Cuban company under the pretext that it was a supposed "gift" to Cuba "because it was too cheap for the international market."  Once again, the coup leaders are using lies to justify their decisions.  The price agreed with the Cuban company was in line with international references which, as a practice, are taken as the basis for the marketing of this product.

The Bolivian government alludes in the official statement to the fact that the Cuban government affects the supposed bilateral relationship of mutual respect based on principles of non-interference in internal affairs. However, on 20 January, a Cuban citizen with a wide and well-known record of acting against her country, at the service and under the payment of foreign powers, was received at the Bolivian Presidential Palace to talk about "the situation of the Cuban people," which constitutes an act of interference in the internal affairs of the Republic of Cuba and complicity with the campaigns against it.

None of the above is unaware of the pressure exerted by the United States government to impose the Monroe Doctrine in Our America or the intensification of the blockade and hostility against Cuba.  The pressures that the government of President Donald Trump is exerting on other countries to force them to join its neoliberal, unilateralist, coercive policies that violate international law are well known.

From the very beginning of the coup, U.S. government officials applied pressure in Bolivia to impose the deterioration of relations with Cuba, persecute Cuban doctors, harass diplomats and abort medical cooperation for the benefit of the Bolivian people.  As was timely reported, some of these repressive and violent operations against health personnel directly involved "diplomatic" officials of the United States.

It is no accident that the events discussed here coincide with a brutal, politically motivated U.S. campaign against the international medical cooperation that Cuba provides in dozens of countries and is a worldwide symbol of solidarity.

When the coup authorities, after the first few days, made statements recognizing the Cuban aid workers and called for a halt to the actions against them, U.S. officials stepped up their pressure.  Then, on November 19, Secretary of State Michael Pompeo declared that "the expulsion of hundreds of Cuban officials was the right decision.

On 21 January, they received Undersecretary of State David Hale in the same tone, coinciding with Pompeo's brazen tour of our region.  On the day of the announcement that pleased Washington, the acting foreign minister was in the offices of the State Department.

The Bolivian coup authorities should not hold Cuba responsible for its decision to suspend diplomatic relations between both countries.  The hostility and offenses have not emanated from our government or our people.  Cuba has acted with patience and prudence, defending and protecting its nationals and avoiding confrontation despite the reprehensible actions of the coup plotters.

The Ministry of Foreign Affairs reiterates its respect for the principles and norms of international law governing relations between States and strict compliance with its obligation not to intervene, directly or indirectly, in the internal affairs of other States.