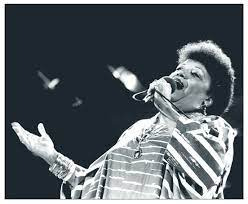 Havana, June 9 (HC)—This June 9 marks the 19th anniversary of the death of Elena Burke, a revered and popular Cuban singer –regarded as one of the greatest all-time exponents of boleros and romantic ballads.

Elena Burke was already famous in the '50s when she performed with the all-female group, Cuarteto D'Aida. Her voice seemed to become stronger with age, as her subtle yet sophisticated technique graced every song she sang with an emotional weight, which earned her the nickname "Señora Sentimiento" (Lady Feeling).

Over the years she performed with top Cuban dance bands such as Orquesta Aragón and with highly acclaimed singer-songwriters, among them Pablo Milanés.

She certainly could "take a sad song and make it better," piercing the emotional veil of her audience with an almost palpable sincerity.

Though she mostly interpreted classic Cuban boleros and son tunes, her versions were distinct, supported by top-notch musicians and arrangements.