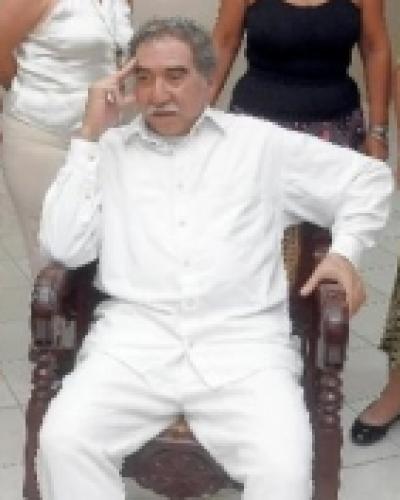 Nobel Literature Literature Prize Winner for 1982, late Colombian writer, Gabriel García Márquez, is a new guest at the Wax Museum in the eastern city of Bayamo, 760 kms east of Havana.

The natural size sculpture of the author of One Hundred Years in Solitude, who was made to celebrate Fidel Castro’s 88th birthday, is dressed in white, sitting, meditating, with his left arm leaning on a rocking chair, and his right hand’s index and middle holding his face. Gabo, as Garcia Marquez was nicknamed, was a very good friend of the historical leader of the Cuban Revolution, Fidel Castro’s, and resided on the island for a number of years.

García Márquez, who passed away in April at the age of 87, is the third foreign guest at the museum, after US writer, Ernest Hemingway, who lived on the island for two decades, and Fabio Di Celmo, the Italian tourist killed by a bomb planted by a terrorist in a Havana hotel in September, 1997.

The only one of its kind in Cuba, the Bayamo Wax Museum includes 15 sculptures made by Rafael Barrios and his sons, Leander and Rafael, who used 40 kilograms of polychrome wax to make Gabo’s sculpture. The Barrios family next project is a wax figure of Juan Formell, the founder and director of the famous popular Cuban band Los Van Van, who passed away in May this year.