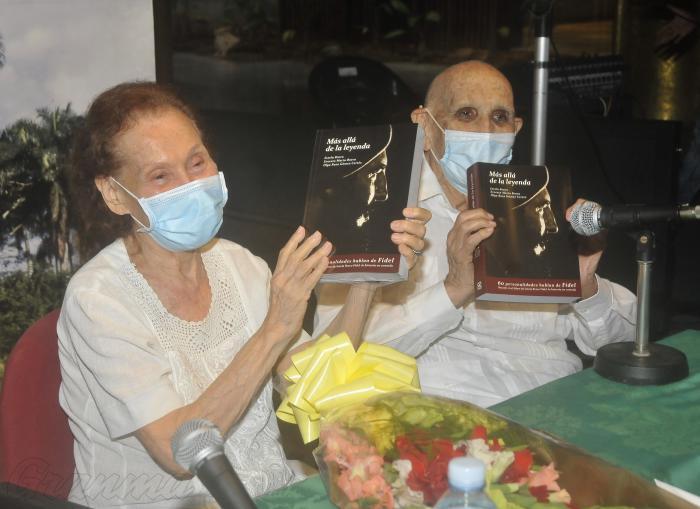 The new title is based on the 2001 audiovisual ‘Fidel: The Untold Story’ by Estela herself and her husband Ernesto Bravo, for which she interviewed some 60 world personalities, political leader, intellectuals, celebrities, from Cuba, the United States, Jamaica, Chile, Italy, who met the Cuban revolutionary leader.

In presenting ‘Más allá de la leyenda’ at Havana’s José Martí Memorial, Estela Bravo said she and her husband had the privilege, the honor of being close to Fidel, getting to know him well. ‘Far beyond just exploring the legend surrounding Fidel, we admire him profoundly as a human being,’ said the American documentary filmmaker.

Cuban researcher Olga Rosa Gómez explained that the book is the result of the tireless work and efforts by Estela and Ernesto Bravo in defense of Cuba, its people and their Revolution, ever since they decided to settle on the Caribbean island state in the early 1960s.

She stresses that the two-part volume, released by the publishing house of the Cuban Council of State, includes several footnotes, with extra information about the main events in Cuba under Fidel’s leadership.

An award-winning documentary filmmaker, Estela Bravo has a vast work about Cuba, its Revolution and leader Fidel Castro. Along with several prizes in Europe and Canada, she and her husband, Ernesto Bravo were awarded, among others, Cuba’s Friendship Medal, granted by the Cuban Friendship Institute and the National Culture Distinction, granted by the Cuban Ministry of Culture in recognition for their significant contribution to the country’s historical and cultural heritage.