Cuba vs Canada in NORCECA Semi-Finals 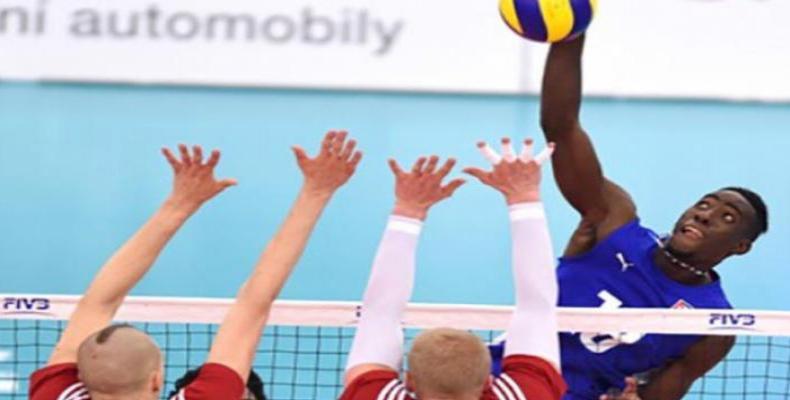 Havana, September 6 (RHC) – The Cuban Men´s Volleyball team faced Puerto Rico this Thursday in the Quarter-Finals of the NORCECA Continental Volleyball Championship at the Winnipeg University, in Manitoba, Canada.

The Cuban team had lost their unbeaten streak after being defeated by United States in three sets (17-25, 21-25, 22-25). The American team has in its roster 8 of the 14 players from their all-star team, directly qualified to the Semi-Finals.

The game´s top scorer was Cuban Miguel Angel Lopez, with 16 points, 12 of them in the attack, while Robertlandy Simon and Marlon Yang scored 8 and 6 points respectively. The winning team´s offense was led by Torey Deflaco and Kyle Ensing, both with 12 points.

Captain Maurice Torres led all scorers with 17 points for the losing side.

Cuba faces Canada at 6 pm local time in Friday’s Semi-Finals.   Puerto Rico will still have a chance to qualify for the Olympic qualifier, if they win their final match for classification.

Cuba has already locked up a spot in the NORCECA Olympic Qualifier next January, but still has the goal to win this tournament. The U.S. is already qualified for the 2020 Olympics.

Cuba head coach Yosvany Muñoz Perez: “I’m very happy because my team performed at a high level against Puerto Rico. Congratulations to Puerto Rico for a good match.  Our serving and blocking was working very well today, it made the difference for our team.”

Puerto Rico, head coach, Oswald Antonetti: “We played better at the end, but it was a matter that we couldn’t close sets. We are disappointed but it’s not over yet and we’ll have to come to play tomorrow.”

Puerto Rico, captain, Maurice Torres: “We made a lot of stupid errors – that’s all I can say. It’s the same problem we’ve had this entire tournament; when it counts, we make too many errors. We have one more chance tomorrow and if we lose tomorrow, we lose our chance of ever going to the Olympics in 2020. We’re going to regroup and keep going.”