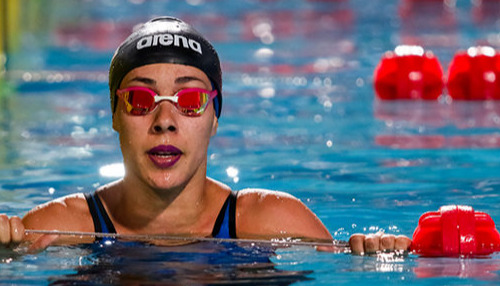 Havana, July 2 (RHC-- Cubans Elisbet Gámez and Luis Vega will attend the Olympic Games in Tokyo, after receiving wild cards from the International Swimming Federation (FINA) for the concept of universality.

"We are very happy.   It is news that I was looking forward to, another dream fulfilled, my second games.   The greatest achievement of an athlete.   I feel blessed for this great opportunity," said to JIT the bookseller owner of the national records in the long course in the six distances (from 50 to 1500 m) and four in short pool.

Elisbet referred to the effort that Cuban athletes have had to face since March 2020 due to covid-19, but that she never lost hope of being able to be present in Tokyo.  "That is why I am very happy and all thanks to the preparation I have been able to do under the watchful eye of my coach Lulu (Luisa Maria Mojarrieta), as well as for the help of my teammates," she said.

The young swimmer has not been able to compete since the end of 2019, when she participated in the Kazan and Doha World Cups.

"On that occasion I was fourth in the 400 meters with a new national record, fifth in 200 and sixth in 800. I attended the Pan American Games in Lima 2019 before, although I did not achieve what I would have liked. I suffered from dengue fever during my preparation and the best was the fifth place in the 200 with 2.00.24 minutes".

Looking ahead to Tokyo, Gámez is training in "bubble" condition at the Baraguá Swimming Pool Complex.   "I hope to repeat or improve my marks in 200 (1:58.55) and 400 (4:13.05), and try to beat the 33rd place among 45 competitors in Rio de Janeiro 2016. I think that now, despite the setbacks, I have a good disposition and preparation to meet those goals," she assured.

For his part, Vega learned of his designation in Kazan, where he has been on scholarship at the International Swimming Center since the beginning of the year, and moves to the Japanese capital on July 16.

"Luis had the opportunity in April to take part in the Olympic qualifier in Russia. He improved the national record in 200 butterfly with 1:58.58, and in June he competed in Croatia. She is disciplined in her training", commented Nelson Garcia, national commissioner, who travels to Tokyo together with Elisbet and Lulu on the 14th.

"Their presence in these Games represents a great honor. They have deserved it for all their effort and dedication. Qualifying in swimming is quite difficult and even more so for an underdeveloped country. We are all very happy," he emphasized.

The executive pointed out that another ondina, Lorena Gonzalez, continues in Kazan preparing for the First Junior Pan American Games of Cali-Valle 2021, scheduled from November 25 to December 5.

"She holds the B mark in 100 butterfly and is hundredths of a second away from the A, so she should qualify," he referred about the 1:02.69 minutes she achieved in 2019 and in fact is listed as a national mark.