The Cuban delegation to Tokyo 2020 is back home, welcomed by President at airport 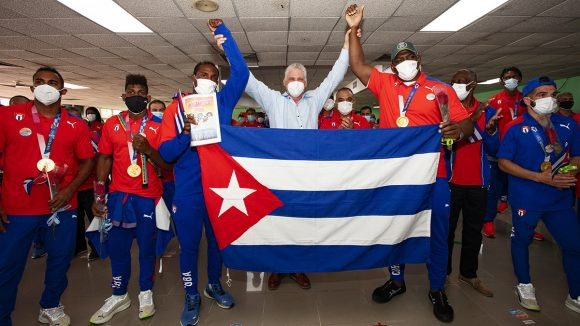 Havana, Aug 9 (RHC)--Cuban President Miguel Díaz-Canel described Monday as a worthy feat the performance of national athletes in the Olympic Games when welcoming them at Havana's Jose Marti International Airport.

The President highlighted the 14th place they achieved in the overall medal standings and, in his welcoming remarks, expressed gratitude and admiration for their feats.

Accompanied by government members, Diaz-Canel praised the performance of the athletes who overcame competition delays, family problems, and training limitations.

Díaz-Canel, in his remarks, praised the courage, bravery, and commitment of each Cuban athlete,  'protagonists of a great joy for the people because each title raised national pride.'

The head of state described the performances as a display of Cuban craftsmanship while stressing that the national athletes gave their best performance of the last four Olympic Games in Tokyo despite the blockade.

During the exchange, the President thanked the athletes for their dedication and sacrifice. He particularly congratulated wrestler Mijaín López, whom he called a legend after winning his fourth gold medal in Olympic Games.

He also recognized the gold medals in boxing and canoeing and the medals won by Leuris Pupo (silver in shooting), Idalys Ortiz (silver in judo), and all the Antillean medalists in Tokyo.

The delegation of the Caribbean nation finished in the Japanese competition with seven gold medals, three silver, and five bronze, to place 14th in the medal standings and surpass the performances of Rio 2016, London 2012, and Beijing 2008.