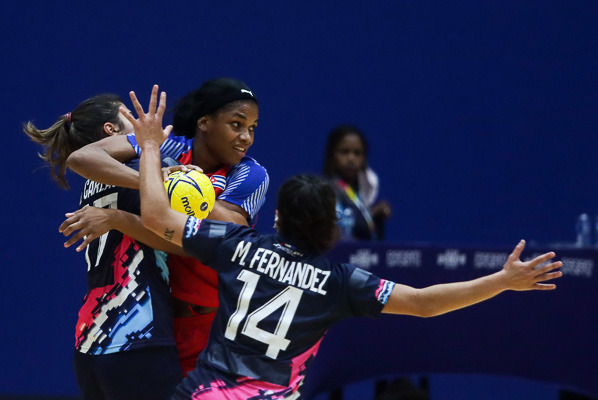 Havana, November 25 (RHC)-- The Cuban team could not break Paraguay's fierce defense, which with the 40-23 victory by a wide margin complicated Group B of the women's handball tournament of the Junior Pan American Games held at the Ivan Vassilev Todorov Mundialist Coliseum.

The face of the West Indian team was not the same as in the opening game when they defeated the favorite team of Brazil 30-29.

Jorge Coll's pupils did not decipher the tactical plan of the South Americans, small in stature, but fast and with good ball control to make their attacking combinations and counterattacks as they pleased.

With this setback, Cuba is obliged to beat the Dominican Republic this Thursday and for Paraguay to beat the Brazilians in order to advance to the semifinals of second place in Group B.

"The match was very different and not because my students went out very confident because of their victory against Brazil, it is that things did not go as we had planned and we analyzed them in the meeting before the match. Our rivals undoubtedly played better," emphasized their head coach.

"However, I am not justifying my team when I say that we are facing a Paraguayan team with international experience in different age categories, including two World Cup players.

Coll also recognized that he was aware that it would be a very difficult match, "my players did not fulfill the tactical plan we discussed, much more against a team used to this type of competition and we knew that the match would be strong. If we made a mistake, the opponents would go ahead."

"We could not take advantage of the outside play, as the Paraguayans used the 5-1 defensive system and did not allow my players to throw much from the back and we did not know how to give them a good answer in attack," Coll pointed out.

In spite of the setback, he declared that "we still have the match against the Dominicans, another important game, I hope my team has a different attitude, they are well prepared, but today when the score was one-sided they didn't know how to turn it around.

I hope that this Thursday the situation will be different, everything will be better and we will achieve our goal of advancing".

For his part, Paraguayan coach Nery Rubén Vera showed his pride in the team he is leading and praised the Cuban players. "They have strong players, they play well, what they lack is not achieved overnight, we have to give them time to this two and three year process so that they acquire the necessary experience, look at how they beat Brazil, surprisingly, that is, they have the will to win".

In other results of the second day, Chile and Argentina each had their second success and will face each other this Thursday for the first place in group A, although both assured a place in the semifinals.

The Chileans defeated Mexico 36-29 and the Argentines defeated Colombia 41-12.

The challenge of key B between Brazil and Dominican Republic had to be suspended due to heavy rains at the end of the afternoon that momentarily affected the court, and its celebration will be rescheduled for the rest day.