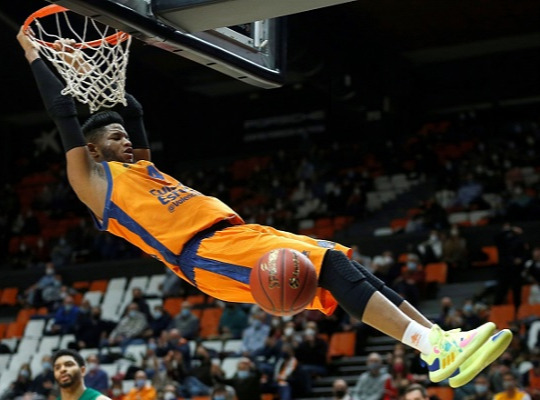 Cuban Jasiel Rivero started on a high note this 2022 as the most valuable player in the resumption of Eurocup basketball.

Havana, January 8 (RHC)-- Cuban Jasiel Rivero started on a high note this 2022 as the most valuable player in the resumption of Eurocup basketball.

Rivero scored 24 points and had a rating of 28 credits in his team Valencia Basket of Spain's 86-68 win over Turkey's Frutti Extra Bursaspor, in a postponed game of round seven.

The Havana-born power forward was very effective in two-point shots, making eight in 11 attempts, and had the same numbers in free throws, in addition to getting three rebounds.

The Valencians led by Joan Peñarroya took a 23-7 lead in the first quarter and then maintained the advantage in the following quarters by 19-20, 20-21 and 24-20 to please their fans at the Fuente de San Luis Pavilion.

On the Turkish side, the top scorer was American forward Allerik Freeman with 25.

This was the fifth victory for the Taronjas, who accumulate three failures and remain fourth in Group B.

The next appearance of the Iberian club in the competition will take place on the coming 12th when they visit Ratiopharm Ulm of Germany.