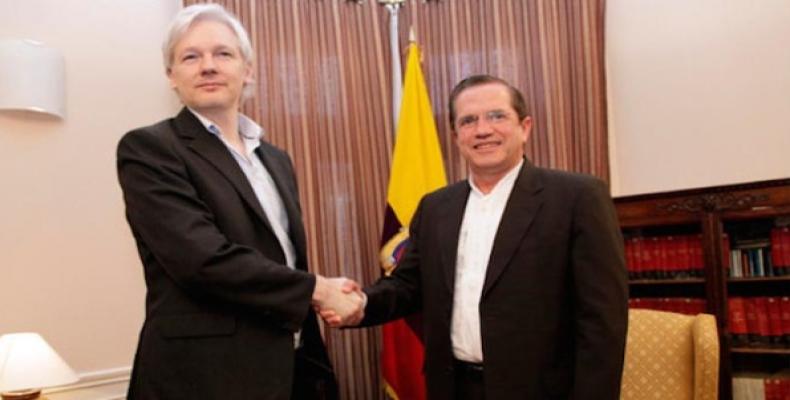 Quito, August 11 (RHC)-- More than four years after Ecuador offered Swedish authorities the opportunity to interview Julian Assange in the nation’s London embassy, a deal appears to have been struck after Ecuador’s attorney general responded positively to a request from the Swedish government to interview the WikiLeaks founder in the building.

“In the coming weeks, a date will be established for the proceedings to be held at the Embassy of Ecuador in the United Kingdom,” states a communique released by Ecuador’s foreign ministry.

The Swedish government recently made a formal request to interview Assange in Ecuador’s London embassy, a shift in policy that could mark an end to the stalemate between Swedish authorities and the whistleblower.

Assange has been living in Ecuador’s London embassy since 2012 over fears of extradition to Sweden and ultimately political persecution in the United States due to his organization’s leaking of diplomatic cables. The WikiLeaks founder is wanted for questioning by Swedish authorities over rape allegations that reportedly took place in 2010, claims he has always denied.

Ecuador has repeatedly called for Swedish prosecutors to hear Assange’s statements over the rape allegations in its London Embassy and has long reiterated its willingness to cooperate with the Swedish justice system.

“For more than four years, the Government of Ecuador has offered to cooperate in facilitating the questioning of Julian Assange in the Ecuadorian Embassy in London, as well as proposing other political and legal measures, in order to reach a satisfactory solution for all parties involved in the legal case against Julian Assange.”

The WikiLeaks founder entered his fifth year inside the Ecuadorean Embassy on June 20 in conditions the United Nations has deemed arbitrary detention. Swedish and British authorities dismissed the U.N. ruling, which was made a day before the Stockholm requested to interview Assange in London.

Ecuador’s decision to continue to grant asylum to Assange has sparked friction with not just Sweden and the U.S., but also with the U.K. But on Wednesday Ecuador’s Foreign Ministry was unequivocal in reaffirming the country’s support for both the U.N. ruling and the whistleblower’s continued asylum.

“These proceedings... do not affect the recent opinions and recommendations of the Working Group on Arbitrary Detentions of the United Nations, which found that Julian Assange is being arbitrarily detained.”

“Ecuador's Foreign Ministry reiterates its commitment to the asylum granted to Julian Assange in August 2012, and reaffirms that the protection afforded by the Ecuadorian State shall continue while the circumstances persist that led to the granting of asylum, namely fears of political persecution.”