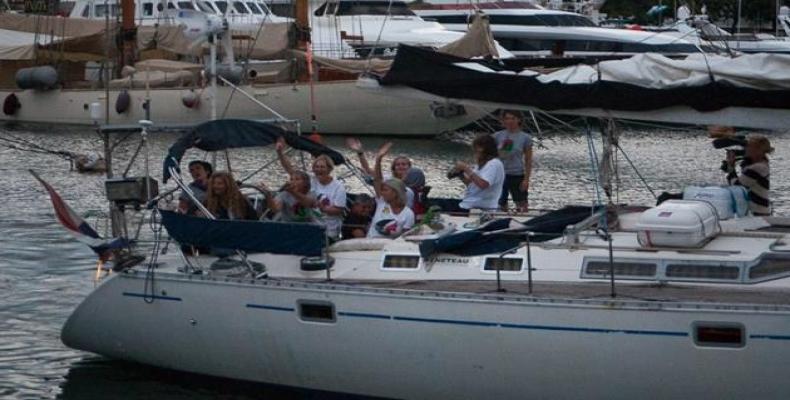 Ramallah, October 6 (RHC)-- The all-women solidarity ship “Zaytouna” has been intercepted by Israeli naval forces while on its way to the besieged Gaza Strip, with the crew members reportedly detained, according to live updates released by the group on social media.

SOS video messages were released by the Freedom Flotilla group after the all women crew members were reportedly intercepted and taken by Israeli forces en route to the shores of Gaza.  Shortly before the release of the videos, Al Jazeera reported that the activists were expected to be detained and taken to Israeli ports, then deported.

As the solidarity ship, whose name means "olives" in Arabic, reached less than 70 nautical miles from the shores of Gaza, inside Israel’s unilaterally declared buffer zone or “military exclusion zone,” the Freedom Flotilla coalition released a statement calling on “governments, public officials and people of conscience to support publicly the right of unimpeded passage for peaceful civilian navigation, and the physical integrity of the crew and participants on board, and to support full freedom of movement for all peoples, in particular the Palestinians of Gaza.”

Palestine Liberation Organization (PLO) Secretary-General Saeb Erekat condemned on Wednesday evening the Israeli takeover of the Zaytouna.  “We strongly condemn the Israeli aggression against today’s international Flotilla that attempted to break the illegal Israeli siege over 1.8 million people in Gaza,” Erekat said in a statement.  “We call upon the occupying power to immediately release them, as well as on their countries, including Spain, Sweden, Norway, Australia, Canada and the United States, to do everything possible in order to prevent Israel from violating the rights of their citizens.”

“The Palestinian cause for freedom and independence is a universal quest for justice embraced by millions worldwide,” Erekat added.  “The flotilla is a humble yet significant reminder that it is time to turn statements into concrete actions.”  The Zaytouna was expected to arrive in the besieged Gaza Strip on Wednesday evening after setting off from the shores of Barcelona, Spain last month as part of the larger Freedom Flotilla.

Issam Yusif, head of the world popular committee for the support of the Gaza Strip, said in a statement in August that the initiative would help to highlight the Palestinian struggle for freedom and an independent state, as well as the everyday Israeli violations of international law and the Palestinian right to freedom of movement.

He also expressed hope that the initiative would help to end the increasingly “tragic situation” of the blockade of the Gaza Strip, as the needs of the Gazan people continue to multiply despite the little aid they receive.

The Freedom Flotilla initially consisted of another solidarity ship called “Amal” -- meaning “hope” in Arabic -- but according to the committee, the Amal ship did not participate in the solidarity mission after facing "unforeseen circumstances" that were out of the control of the organizers.

However, organizers decided to keep the Amal solidarity ship for use in later campaigns centered on ending Israel’s devastating siege on the Gaza Strip.  The Gaza Strip has suffered under an Israeli military blockade since 2007, when Hamas was elected to rule the territory. Residents of Gaza suffer from high unemployment and poverty rates, as well as the consequences of three devastating wars with Israel since 2008, most recently in the summer of 2014.

The 51-day Israeli offensive, termed “Operation Protective Edge” by Israeli authorities, resulted in the killings of at least 1,462 Palestinian civilians, a third of whom were children, according to the UN.

The flotilla is the fourth of its kind since 2010, when the first Freedom Flotilla was brutally attacked by Israeli naval forces, who killed ten Turkish activists aboard the Mavi Marmara ship.

No Israelis were ever charged for the killings on the Mavi Marmara, despite a case being filed at the International Criminal Court (ICC) charging Israeli officials with war crimes.

An agreement in June between Israel and Turkey, which reportedly included a commitment by Turkey to pass a law voiding all old lawsuits against the Israeli soldiers who participated in the raid on the aid flotilla, ended six years of diplomatic strife following the attack.

The UN has said that the besieged Palestinian territory could become "uninhabitable" by 2020, as its 1.8 million residents remain in dire poverty due to the Israeli blockade that has crippled the economy, while continuing to experience the widespread destruction wrought by three Israeli military offenses, and the slow-paced reconstruction efforts aimed at rebuilding homes for some 75,000 Palestinians who remain displaced following the last Israeli assault in 2014.