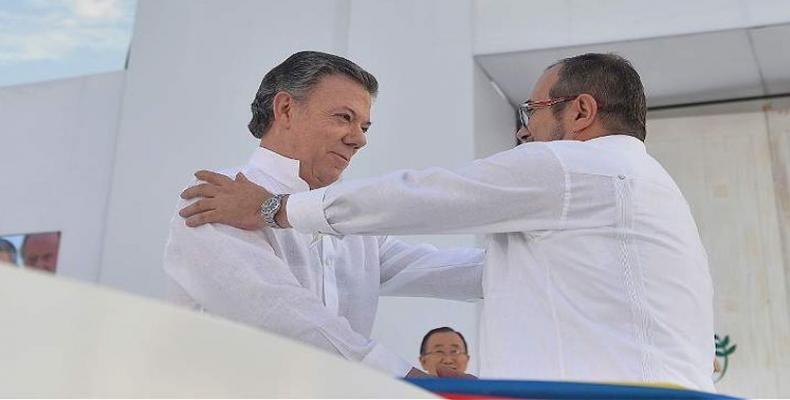 Bogota, October 11 (RHC)-- Colombian President Juan Manuel Santos has announced that he will donate the money he will receive as part of the 2016 Nobel Peace Prize to victims of the country's internal conflict.

Santos won the 2016 Nobel Peace Prize for his efforts to end a 52-year-old war with the Revolutionary Armed Forces of Colombia, the FARC, in what was a show of support days after voters rejected a peace deal Santos signed with the rebels.  The Nobel prize comes with a cash award of 8 million Swedish crowns or approximately $930,000 dollars.

Santos, who is from a wealthy family, made the announcement while attending a mass in the jungle town of Bojaya in western Colombia.  He said: "After the Nobel Peace Prize was announced, I wanted to come here to share with you all, because you all symbolize what the war in Colombian has been, you are a symbol of the bad, but also the good of this war and the good part is how we are going to end it with spiritual strength, with a capacity to forgive, with the capacity for reconciliation."

Bojaya, like many of Colombia's impoverished rural and border area communities, voted in favor of the peace agreement signed by Santos and the FARC guerrilla leader Timochenko in Cartagena on September 26th.

The Norwegian Nobel Committee said Santos had brought one of the longest civil wars in modern history significantly closer to a peaceful solution, but there was still a danger the peace process could collapse.

Santos has promised to revive the plan even though Colombians narrowly rejected it in a referendum.  Both negotiating teams have already resumed discussions and the FARC has pledged to abide by the terms of the deal, including a cease-fire that has already dramatically reduced violence.

Santos is the first Latin American to receive the peace prize since Indigenous rights campaigner Rigoberta Menchu of Guatemala won in 1992, and is the second Colombian laureate after writer Gabriel Garcia Marquez, who won the literature prize in 1982.