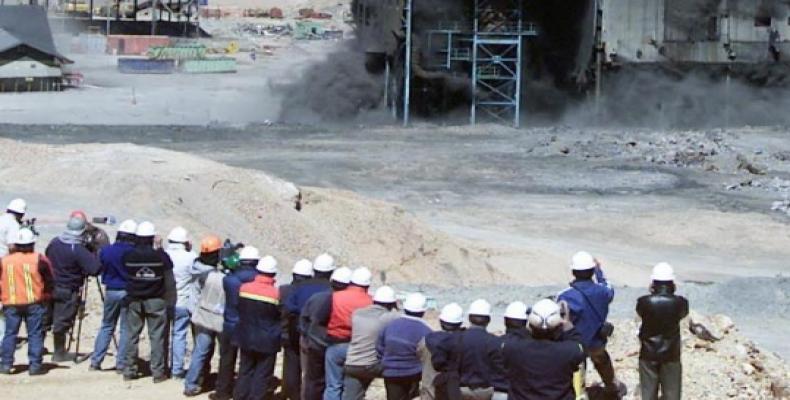 Lima, October 21 (RHC)-- A book released by the NGO CooperAccion titled, "Water Governance in Mining Areas of Peru," shows how farmers have increasingly seen their access to water recourses reduced due to mining activities. The study also reveals how mining companies have the power to control the legal adjudication of water resources.

According to the authors of the book, Ruth Preciado and Carmen Alvarez, companies in the field are allowed to obtain access to water because of a strong mining lobby, lack of official information collected by the state, lack of transparency and weak state regulating institutions.

Jose De Echave, director of CooperAccion, supports the book's argument stating, “The biggest problem is the obscurity, the lack of transparency and in addition, the lack of updated information about the subject. Only recently the national water authority has built a database starting with 2014 but it is not accessible.”

Between 2011 and 2014, there were 153 social conflicts based on problems with mining and access to water according to the state ombudsman. A high number of those cases occurred in the region of Cajamarca. Mining companies in Cajamarca claim that they only consume 1 percent of the water resources but the researchers show that such calculation corresponds to official studies made in 1979.

Another problem is that current legislation lets mining companies use water resources before an official environmental impact study is finished.  And once the study is finished, there are no institutions with the resources to enforce the resulting rules and regulations to protect the water.

Preciado explains, “licenses to water use can be distributed before the environmental impact study is approved.  It is also not necessary to get the approval of the basin council. Such measures leave mining with much more power.”