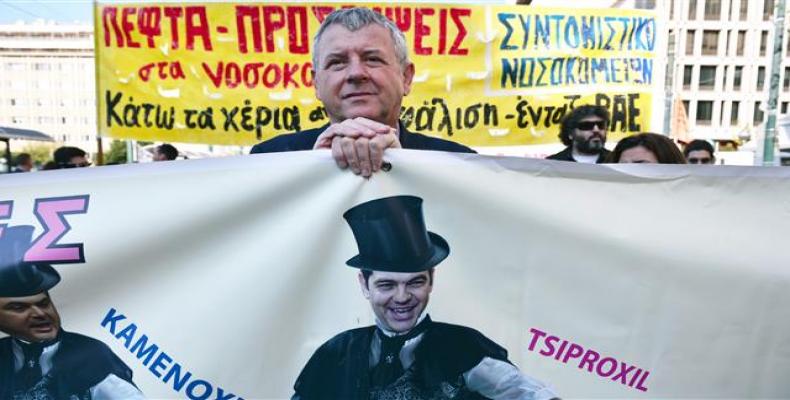 Athens, November 25 (RHC)-- Greek public sector workers have gone on a nationwide strike to protest against the austerity measures planned by the government of Prime Minister Alexis Tsipras to secure bailout loans from its international lenders.

On Thursday, doctors, teachers as well as municipality workers joined the one-day industrial action, organized by the main public workers’ union, ADEDY, in a show of protest against labor and pension reforms in addition to asset sales by the government.  A separate 24-hour strike was also called by seamen.

The strikers joined by pensioners marched through the streets to the parliament building, waving flags, beating drums and chanting slogans such as “Tax the Rich.”   They also carried banners that read, “Our needs are above their profits” and “No more cuts!”

ADEDY said in a statement: “Workers and the poor are always the ones to pay the cost of the crisis.”  And the union added: “(A government) elected to stop the austerity slide is now carrying out neo-liberal policies in their entirety.”

The new budget envisages around a billion euros increased government income from extra taxation on items including cars, fixed telephones, pay TV, fuel, tobacco and beverages.  Public spending on salaries and pensions will also be cut by 5.7 billion euros in 2017.

Unions are also angry about government plans to raise over two billion euros next year by selling state assets, including regional airports and power plants.

Despite pre-election promises to end austerity, Tsipras signed up to a bailout deal with Greece’s foreign creditors – the European Union and the International Monetary Fund (IMF) – in July 2015 and agreed, in return, to adopt a set of new austerity reforms in an attempt to keep the debt-ridden country afloat.  The deal was signed despite a referendum earlier that year, in which Greek voters said a resounding ‘NO’ to such a bailout agreement.

Currently, the Athens government is at loggerheads with its lenders over unpopular labor reforms required as part of Greece’s second bailout review. Talks between the two sides were suspended on Monday amid their disagreements.

Athens wants a swift conclusion of its second assessment to qualify for more debt relief early next year.  Finance ministers from the main EU states are to meet IMF negotiators on Friday in an effort to reach an agreement on the Greek bailout early December.