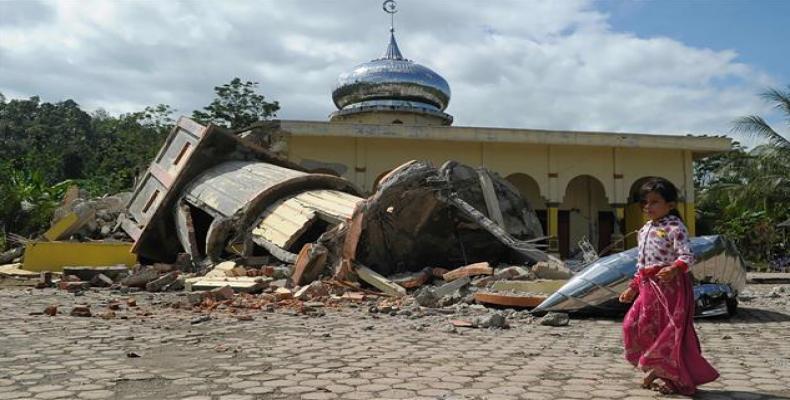 Jakarta, December 8 (RHC)-- Officials in Indonesia have appealed for urgent medical help after a massive earthquake that devastated the western part of the country, killed nearly 100 people, and wounded hundreds more.

The 6.5-magnitude seismic activity occurred off the coast of the regency of Pidie Jaya in Aceh Province on the Indonesian island of Sumatra at a depth of 17.2 kilometers on Wednesday.

According to the latest figures provided by Aceh's disaster mitigation agency, the 15-second-long quake and its five rattling aftershocks have so far killed 99 people and inflicted injury on more than 700 other people, in many cases seriously.  The quake has also displaced over 8,000 people.

"We need surgeons and orthopedics, because many victims have fractures," said Said Mulyadi, the deputy chief of the worst-hit Pidie Jaya district, on Thursday, adding that the overwhelmed and ill-equipped hospitals and medical centers in the region were also in desperate need of medicine and supplies to treat the wounded.

Muhammad Reza Faisal, the director of the local hospital in Pidie Jaya, also said that beds had to be set up in tents outside the hospital as the facility had been flooded with the injured.

The pre-dawn earthquake flattened hundreds of homes, shops and several mosques across the province. The death toll is likely to hike as many are feared to be still trapped beneath the debris from collapsed buildings.

Search and rescue teams have been dispatched to the region, combing through the rubble by advanced life-detecting devices but hopes are fading with the passage of time.

Thousands of soldiers and emergency personnel have also been deployed to the affected regions, using heavy machinery to push aside rubble in the worst-hit areas. Hundreds of volunteers, equipped with little more than hoes and their bare hands are also helping by clearing the debris and wreckage.

The army has established makeshift shelters, kitchens and a field hospital in the hard-hit town of Meureudu.  "Our priority today is to re-check all the buildings to ensure no more victims are trapped, and to help the refugees," said Aceh's military chief Tatang Sulaiman on Thursday.

Indonesian President Joko Widodo has called on all Indonesians to pray for their countrymen in the disaster-stricken province.